Most people know that the Nazis persecuted gay people as part of their attempt to purify the German people. They sent between 5000 and 15,000 to concentration camps wearing the infamous pink triangle. As part of their hopes to cure homosexuality the Nazis performed various tests and procedures on the prisoners, often with horrific results, including castration. 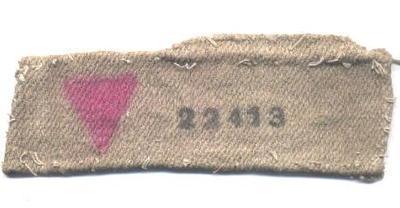 Image via the Freedom Files

What most people don’t know is what happened when the concentration camps were liberated by the Allies in 1945. Gay prisoners were not considered “victims” by the Allied Military Government, and no reparations were authorized. Worse, many of the prisoners were forced to serve out their sentences in regular prisons. Gay acts were criminal under Paragraph 175 of the German criminal code, which had been broadened in 1935 to include anything that the court could consider a “lewd act”, even if there was no physical contact with another person. So in the eyes of the Allied government, gay concentration camp survivors were simple criminals, not innocent victims.

Reply Dennis Stone
10:17 AM on June 24, 2013
Ulysses - That's amazing that you actually knew a pink triangle survivor. There weren't all that many of them, and I didn't think many made their way to the U.S. I might have to see if I can find Mr. Plant's book. I knew they weren't treated well, often by the other inmates as well as the Nazis.

Reply Ulysses Dietz
8:04 AM on June 24, 2013
Richard Plant, a gay survivor of the Nazi camps, was a friend of ours back in the 1980s when he published his book "Men in the Pink Triangles." Because of Gary's family, and where we live, I've known lots of Holocaust survivors here in NJ, but Richard was the only pink triangle survivor - and they were not treated well.

Reply CATHY CRONIN
3:36 PM on June 23, 2013
Thanks for this one Dennis. Like you & Yiannis, I thought I knew about the concentration camp story, but I had no idea about the liberators actions :-/ I'm a big history buff, & this time period was especially interesting to read about, though also horrifying. But of course, it's not really surprising when you think what the laws were like in those days. Still --- shocking. I also recommend Bent, which I finally just saw about a week ago (available on YouTube!). The film ended before the war was over, so there was no mention of what awaited them :-/ It's funny, because just before seeing Bent, I watched Christopher And His Kind (also on YouTube!), which took place in 1930s Berlin, before the war, & where the film Bent opens. Talk about a different viewpoint ... !! Ha ha!! Also, took me a few minutes to recognize Mick Jagger ... ! He was good though ;-)

Reply Dennis Stone
8:13 PM on June 22, 2013
One of the reasons we're doing the history pieces is because there's a lot of our history that even people who know a lot of history aren't aware of. Andy's doing a series on Stonewall, and I thought I pretty much knew that history. But there's more to it than I realized. The concentration camp thing really shocked me. But think about it. In 1945 almost everyone thought of gay people as deviants and criminals. Today we get all upset if Blaine and Kurt's kisses on Glee aren't quite as long as Rachel and Finn's.

Reply Yiannis
7:57 PM on June 22, 2013
Although I knew the history concerning the pink triangles in the concentration camps, I was shocked to hear of the post-war treatment of our brothers. Thank you Dennis! By the way, I'd like to recommend to films on the subject: "Bent", based on a great play by Martin Sherman and including such great actors as Clive Owen, Lothaire Bluteau, Ian McKellen, Mick Jagger, Nikolaj Coster-Waldau, Jude Law, Rupert Graves and Rachel Weisz) and "A Love To Hide" (Un Amour A Taire) with Jérémie Renier and Bruno Todeschini. Have your handkerchiefs handy though: there will be tears.

Reply Cole
10:05 AM on June 22, 2013
What a terrible revelation. I did not realize this happened. I can't imagine how awful it would be to survive a concentration camp and then be told by your "liberators" that you deserved your punishment and that you would have to remain in prison.