With the rapid, sometimes dizzying, forward momentum on same-sex marriage in recent times, it's easy to forget that the fight for marriage equality dates back over 40 years. What follows are some of the highlights and lowlights of that battle. 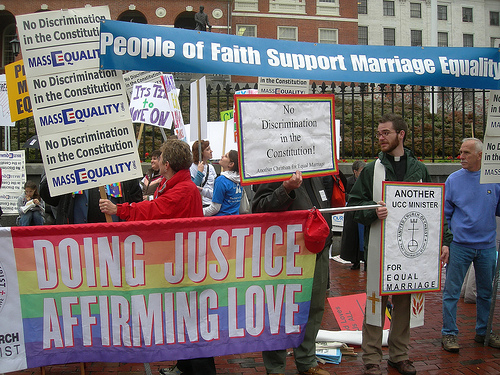 • October 10, 1972: The U.S. Supreme Court dismisses the case of Baker v. Nelson “for want of a substantial federal question. Richard Baker and James Michael McConnell had sought a marriage license in Minnesota in 1970 and were refused. The circumstances of the dismissal establish Baker as precedent, becoming a stumbling block to marriage equality for decades to come.

• March 26, 1975: Clela Rorex, a Boulder County, Colorado clerk, begins issuing marriage licenses to same-sex couples. Community outrage greets her action, with one man angrily demanding Rorex issue a license for him to marry his four year-old horse (Rorex declined on the grounds that the horse was underage). Colorado's Attorney General would later declare the licenses invalid but one couple, Richard Adams and Anthony Sullivan, spend the next decade seeking to have their marriage recognized.

• December 17, 1979: A California district court rules that the marriage license issued in Colorado to Sullivan and Adams is invalid for immigration purposes. Sullivan, an Australian national, was seeking to obtain immigration rights.

• February 25, 1982: The Ninth Circuit Court of Appeals upholds the lower court ruling in Adams v. Howerton, preventing Sullivan and Adams from relying on their Colorado-issued marriage license for immigration purposes.

• September 30, 1985: The Ninth Circuit again affirms that Sullivan and Adams' Colorado marriage license is invalid for immigration purposes. The opinion is written by future Supreme Court Justice Anthony Kennedy. The couple leaves the country but eventually returns, with Sullivan living for years as an illegal alien.

• May 5, 1993: In a decision that shocked the nation, the Hawaii Supreme Court rules in Baehr v. Lewis that denying marriage licenses to same-sex couples violates the state constitution. It remands the case to the trial court with the requirement that the state prove a compelling interest for denying such licenses.

• January 19, 1995: The District of Columbia Court of Appeals rules that the district's human rights ordinance banning sexual orientation discrimination does not guarantee a right to same-sex marriage.

• September 21, 1996: President Bill Clinton signs the Defense of Marriage Act into law. Section 2 of the Act empowers states to ignore same-sex marriages performed in jurisdictions where they are legal. Section 3 defines for federal purposes the words “marriage” and “spouse” to apply exclusively to mixed-sex couples.

• December 3, 1996: In Baehr v. Miike (formerly Baehr v. Lewis) the trial court rules that the state failed to demonstrate a compelling interest in denying same-sex couple marriage licenses. Opponents mount a campaign to amend the state constitution to give the legislature the power to ban same-sex marriage.

• December 9, 1999: Following the passage of a constitutional amendment and a law banning same-sex marriage, the Hawaii Supreme Court rules that it is no longer unconstitutional to deny same-sex couples marriage licenses.

• March 7, 2000: California voters approve Proposition 22, barring the state from recognizing same-sex marriages even if performed in a jurisdiction that recognized them.

• May 28, 2003: Texas passes a Defense of Marriage Act, allowing the state to ignore legal marriages and partnerships performed outside the state.

• November 18, 2003: The Massachusetts Supreme Judicial Court rules that the state constitution requires recognition of same-sex marriage. The Court rules on February 4, 2004 that civil unions are insufficient to address the inequality. The U.S. Supreme Court, without comment, rejects an appeal in November.

• February 6, 2004: Ohio passes a Defense of Marriage Act that bars same-sex marriage in the state, prevents state funds from paying for benefits for same-sex couples and blocks recognition of any same-sex union performed outside the state.

• February 12, 2004: San Francisco officials begin issuing marriage licenses to same-sex couple, an act of civil disobedience that will see thousands of couples marrying in the city until the state supreme court orders the city to stop on March 11.

• February 27, 2004: New Paltz, New York Mayor Jason West begins performing same-sex weddings. He is eventually charged with 19 misdemeanor charges of “solemnizing marriages without a license”. The charges are eventually dropped but West is enjoined by a court from performing additional ceremonies.

• March 3, 2004: Multnomah County, Oregon begins issuing marriage licenses to same-sex couples. On April 20, a circuit court rules that the state must accept any licenses already issued but blocks the county from issuing any more.

• November 2, 2004: As part of a Republican presidential election strategy, ballot initiatives to ban same-sex marriage appear on the ballots of eleven states, passing in all of them.

• April 14, 2005: The Oregon Supreme Court rules that the marriage licenses issued to same-sex couple by Multnomah County were void when issued.

• May 15, 2008: The California Supreme Court strikes down the state ban on same-sex marriage. 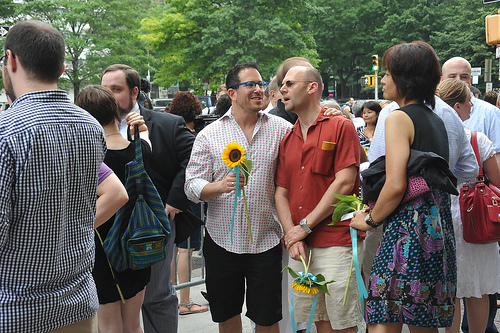 • April 3, 2009: The Iowa Supreme Court rules that the state must offer same-sex marriage. Voter backlash leads to the removal of every justice who voted in favor of marriage equality except one being removed from the bench.

• May 6, 2009: Maine legalizes same-sex marriage. The law was slated to take effect in 30 days but opponents mounted a campaign to overturn it by referendum.

• May 26, 2009: The California Supreme Court rules in Strauss v. Horton that Proposition 8 is legally valid but that the approximately 18,000 marriages performed before its passage are also valid.

• July 8, 2010: A district judge in Massachusetts rules in two cases that Section 3 of the Defense of Marriage Act is unconstitutional.

• February 23, 2011: The Justice Department announces that it will no longer defend the constitutionality of Section 3 of the Defense of Marriage Act.

• August 1, 2011: The Squamish tribe in Washington votes unanimously to legalize same-sex marriage, provided one member of the couple is a registered tribal member.

• March 5, 2013: The Little Traverse Bay Bands of Odawa Indians in Michigan votes to recognize same-sex marriage for its members.

• June 24, 2013: the Santa Ysabel Tribe in California announced that it recognizes same-sex marriage for its members.

• June 26, 2013: The U.S. Supreme Court strikes down Section 3 of the Defense of Marriage Act, ruling that it violates the Fifth Amendment. The Court also dismisses a challenge by proponents of California's Proposition 8, allowing the original ruling striking it down to stand and paving the way for marriage equality to return to the state.

Reply Dennis Stone
2:14 AM on June 29, 2013
Nice work John. My favorite is the second one you list, where the county clerk denied the license of a guy to marry his horse because the horst was underage!

It's been a long road (that we haven't reached the end of), and it's been easy to forget the details and all of the ill will that has been expressed by the right wing through their actions. But it's also great to see the support we've gotten, it helps to push those bad thoughts about the past into the background.