The Stonewall Story - Part 2 - The Riots

The Greenwich Village district of New York City had, since the 1950s, been home to artists, poets and musicians along with a comparatively large LGBT population. It drew gay people, particularly young gay people, from all over the country. Many of these young people had been rejected by their families, their communities and by society in general. Some arrived with little more than the shirts on their backs and few, if any, resources. Life was difficult, but at least they were among sympathetic souls who understood what it was like to be outcasts. They did anything to get by, some resorting to panhandling and petty theft just to feed themselves. Those who did have jobs found the Village a place to be themselves after a day of concealing their identity in a very LGBT-unfriendly world.

Christopher Street in the West End of Greenwich Village, and the surrounding neighborhood, was home to several gay bars. Gay bars were the center of gay social life at the time. All of these bars operated outside of the law, being denied liquor licenses by the authorities because they catered to the LGBT population in the Village. Payoffs to the police and other authorities insured that they were able to keep their doors open at least part of the time. They were still subject to the occasional raids by the police, especially when the payoffs weren't made on time. Among those bars was the Stonewall Inn, which at the time was operated by an organized crime syndicate.

What set the Stonewall apart from the others was that it had become somewhat of a refuge for those just old enough to drink, and some who weren't. It was easy for younger LGBT people who had few resources to spend time there - pay a cover charge of $3.00 per night, and you were in. One did not have to buy their watered-down drinks – if you had three bucks, you could spend all night there without spending more. Even the most destitute person could manage to panhandle the cost of the cover charge. In other taverns, you were out on your ear if you didn't buy drinks, and buy them at an appropriate pace. 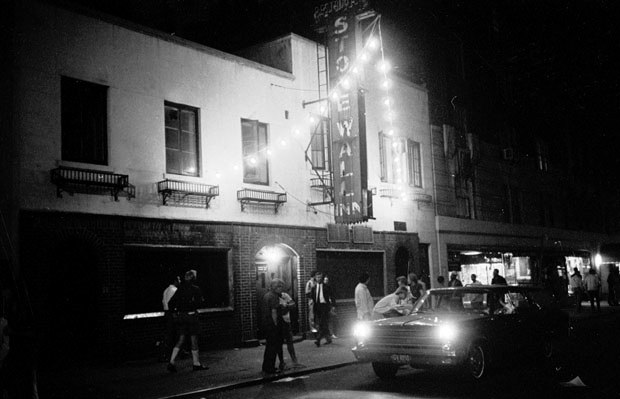 As a result of this policy, the tavern was successful at drawing younger people and became somewhat of an LGBT community center. Homeless LGBT youth found kindred spirits and enjoyed refuge from the street, even if it was only temporary. Among the gay men and lesbians, drag queens and transgendered people also found a place where they could be themselves – and cheaply. It was a home, of sorts, for those who had none.

June 27th, 1969 started out as a day not unlike many others in New York City. Summer in New York City can be a day-long exercise in trying to keep cool if you're homeless and hopeless. That day was no exception – the mercury advanced through the day to peak at 88°. Nighttime saw a little relief – the temperature fell to 68° in the sanctuary of Central Park and then began to rise through the overnight hours. That was small comfort to those who spent their time in Greenwich Village, where buildings radiated their stored heat through the night. These are the days and nights when tempers are short, people are cranky and you never know just what might happen because of that.

That night, and into the early morning hours of June 28th, the New York City police were on a mission. It was time for one of their periodic raids on gay bars in the Village, this time selecting the Stonewall as their target. It was thought to be an easy target; they had raided it already once that week.

At 1:20 A.M., the NYPD appeared in the Stonewall and announced that they were shutting the place down and everyone inside had to furnish identification. Those dressed as females were segregated from the male-appearing crowd. The situation was familiar to many of the patrons. They had seen it before, both at the Stonewall and other gay bars in the Village. Others hadn't, adding to an already uneasy atmosphere.

This raid was different, however. Some of those who had been through raids before refused to furnish identification. Drag queens and trans people were also uncooperative. Those whose identification was checked and found to be legal were released and told to “get lost.” Instead of leaving the immediate area, they hung around in front of the tavern. The resultant scene drew a crowd, one of sympathetic LGBT people. 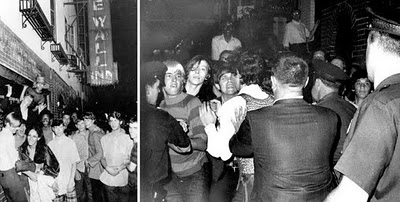 Inside the bar, the police decided that the best course of action was to haul everyone down to the precinct station and sort it all out there, as the arrested bar patrons were generally being uncooperative. Police tried to keep the peace inside the tavern while they awaited the arrival of paddy wagons that would haul the arrestees to the station.

The crowd, growing to an estimated 500 or more people, began to become restless and taunt the police, shouting “Fag Power” and singing “We Shall Overcome.” Reports from the scene say that one of the first to be hauled into the paddy wagons was a young transgender woman named Sylvia Rivera. As she was being dragged into the wagon by NYPD officers, she yelled to the crowd: “Can't you guys do something?” The crowd gathered in front of the tavern decided that they could do something, and did.

All hell broke loose. The pent-up frustration of the residents of Greenwich Village had become palpable. Arrestees escaped from paddy wagons. The crowd, now more of a mob, started throwing pennies and beer bottles at police, followed by bricks and whatever else they could get their hands on. Some tried to overturn police vehicles and slashed the tires on a few patrol cars. Police tried to disperse the growing crowd of people with little result, and were forced to retreat inside the Stonewall, hauling some of the arrestees with them. 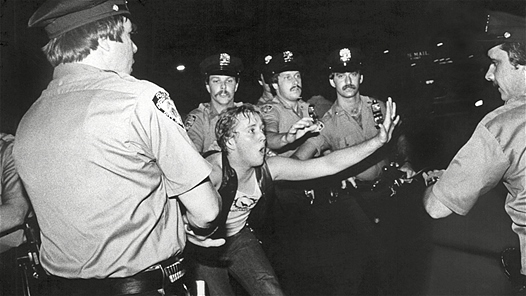 The crowd aggressively went after the police, at one point breaking windows in the tavern, starting fires inside and outside and battering the front door to gain entrance. The police were trapped inside in spite of brandishing their guns, and had to call for reinforcements.

Outside, the crowd began to go berserk. When the police reinforcements arrived, they were greeted with a defiant crowd. Although the police used billy-clubs against some of the crowd, they found themselves at a disadvantage at times as some in the crowd had armed themselves with whatever they could find. Due to the layout of the streets in that part of the city, police would chase rioters, only to find the rioters had circled the block and were chasing the police instead!

It was nearly dawn before the crowd dispersed. But the end was still to come. Some of the veterans of the night's riot congregated in Christopher Park, near the tavern and “home” to some of the homeless young LGBT people.

That Saturday saw the temperature climb to 96°. The previous night's crowd was still energized, buoyed by their successful engagement with the police. Successful because they had let the police know that they were not going to quietly acquiesce, and because they actually had them on the run for a time. As the day went on, tension once again was building. The now burned-out Stonewall had reopened, setting the stage for another night of confrontation with the police. 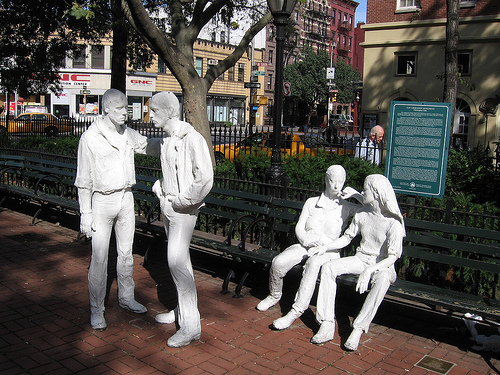 The statue group is called "Gay Liberation" and were done by George Segal. They are located at the top of Christopher Street.

The police started with additional manpower on that night. That did not seem to make a difference to the crowd; they fought nonetheless until dawn on Sunday the 29th.

The following two nights saw less action; the weather had turned rainy and most of the previous night's participants were either staying dry or recovering. Wednesday, July 2nd saw another mob action, this time directed primarily at the Village Voice, which had written a report of the previous nights' events that was seen as being critical of the protesters. The crowd threatened to burn down the offices of the Village Voice. This time, the action only lasted an hour or two, and once again, both protesters and police were injured.

When all was said and done, the LGBT people of Greenwich Village had carved out a place in history. Not only had they successfully battled the police, but had come out of it with a new feeling of empowerment, and a new mission: to not allow themselves to be subjugated. Gay power was born and was to profoundly affect the way the gay rights movement carried on.

Reply Yiannis
12:35 PM on June 30, 2013
What doesn't fail to impress me is that most of the time, History is made not by premeditated actions, but quite by accident. Which is similar to the way Evolution in Biology works. If the circumstances permit it, vastly important things may happen.

Reply John
12:01 PM on June 30, 2013
One of the details that always strikes me when reading about the riots is how the rioters uprooted a parking meter to use as a battering ram on the Stonewall's front door. How in the hell do you uproot a parking meter?