The Stonewall Story - Part 3 - The Aftermath

While these things are certainly important, the events of late June and early July in 1969 helped gay people to realize a vital idea that Frank Kameny articulated as early as 1961: that gay people were not abnormal and were a natural part of the human condition. 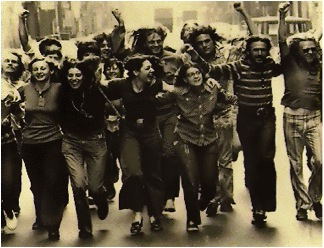 Part and parcel to this was the notion that we, as gay people, no longer needed external validation to our existence. Previous to the 1960s, gay rights groups relied on experts external to the movement to make the case that “Gay is OK.” Having a psychologist come to speak at an early gay rights organization's meeting was somewhat of a coup; it was validation to be sought and valued. Generally speaking, LGBT people had been convinced that they were not simply unusual, but abnormal. Kameny's insistence that we were a normal variant of humanity was an idea that began to take root after the Stonewall riots when that new kind of activism brought young people with fresh outlooks into the movement. LGBT people were now seeking civil rights because they recognized themselves as part of the normal spectrum of human existence.

In the 1960s most LGBT people lived in outright fear and were exploited personally and economically. The fear of being harassed by the authorities and arrested for lewd acts, and fear of public humiliation wasn't a paper tiger – the fears were well-founded. Many with good jobs were blackmailed and those who didn't were exploited by everyone from organized crime to petty criminals. The riots at the Stonewall Inn marked the beginning of LGBT people realizing that in order to rid themselves of that fear and exploitation, they had to become present and actively make their case for liberation from that fear. As Sabrina Sojourner, the first openly gay Washington, D.C. Delegate has said, “It was the beginning of overcoming shame.” 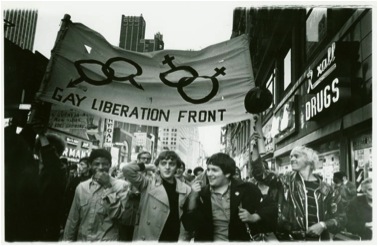 New organizations were formed to band LGBT people together in order to present the case for gay liberation. One of the most memorable of them was relatively short-lived. The Gay Liberation Front formed in the wake of the Stonewall riots in July of 1969. It was also the first group to actually use the word “gay” in its name. Harry Hay, the renowned founder of the Mattachine Society and the Radical Faeries, was instrumental in founding the Los Angeles GLF operation and served as its chair for a time. Other GLF chapters, called “cells,” sprang up throughout the U.S., the U.K and Australia.

The U.S. GLF had problems from the beginning that were the result of how the organization was formed and the myriad goals and sympathies it expressed. Even its publication, Come Out, didn't last long; it was taken over by the “June 28 Cell,” another of the many fledgling gay rights organizations formed in the wake of Stonewall. The GLF also sympathized with a number of marginalized groups with liberal or radical causes, and had only a tangential relationship to the main goal of gay rights. Instead of simple votes on matters of import to the organization, they made decisions by consensus in a cumbersome process that made for delays in action. Infighting was common; that and a lack of focus spelled their demise in 1972.

The Gay Activists Alliance, formed in December of 1969, took a different path. It had a more clearly defined focus: to “secure basic human rights and dignity, and freedom for all gay people.” It was a splinter group of the GLF, having been formed by members unhappy with the direction that the GLF was taking. 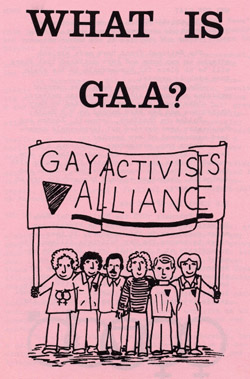 Both the GAA and the GLF used an effective tactic known as the “zap,” which can be considered the forerunner of today's “flash mob.” Participants would show up suddenly to demonstrate in a non-violent way, and publicly, noisily shame those people or organizations that were seen as impediments to gay empowerment, or had in some way injured the gay community.

The GAA headquarters was a victim of arson at their headquarters (called “Firehouse 99”) in the Soho district of New York City. They disbanded in 1981 after their organization's magazine, Gay Activist, stopped publishing in 1980.

The Lavender Menace was another organization to come out of the GLF, named for a phrase that NOW president Betty Friedan used when referring to Lesbians within NOW. Like the GAA, it was formed by members of the GLF. Still more organizations formed after the Stonewall riots. In the course of the first year after the riots, the number of gay activist organizations in the U.S. grew from about 50 to more than 1,000. A year later, the count was up to 2,500. 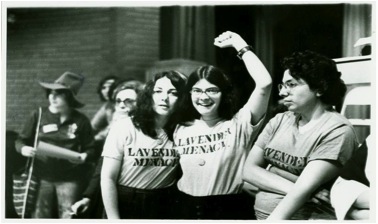 The success of this newer approach to gay activism had emboldened the movement. One important goal that we are still fighting for was first expressed in the wake of the riots – marriage equality. This might have been a pipe dream for earlier activists, and many of them say that they could never have dreamed that marriage equality would ever come within reach. They were struggling with the simple notion of gay being normal; marriage to their same-sex lovers had not been in the picture. The youth-driven activism in the early post-Stonewall era focused on turning things upside down, and what better way to do that than to challenge the notion of opposite-sex marriage?

In the years since, we've seen radical organizations, and others who, while still being vehement in making the case for gay equality, have been less radical in their approach. But even larger and more mainstream organizations such as GLAAD and HRC owe their existence to not only the pioneers of the gay rights movement, but to the radical philosophies espoused by the GLF and the GAA.

In the end, we have a lot of people to thank for the progress we've made in the movement, not the least of whom are those hungry, abused, and angry young people that decided on June 28, 1969 that they'd had enough of being relegated to being victims.

If you'd like to know more about the Stonewall riots, here's some additional reading to consider:

Stonewall: The Riots That Sparked the Gay Revolution by David Carter