Today's Gay History Lesson: The Ordination of William Johnson in 1972

In America much of the most vehement opposition to gay equality has come from the Christian church. (Though religion is certainly not necessary to produce a virulently anti-gay society, as we have seen under overtly atheistic regimes such as in China and the Soviet Union.) Because Americans have been and remain overwhelmingly Christian, that is a problem.

In recent years, however, Protestant Christian churches have begun to be part of the solution rather than part of the problem. Several now ordain gay people as pastors and have become overtly welcoming. Local congregations march in Pride parades. Other churches are on that path, and have at least begun to preach acceptance and condemn hate. 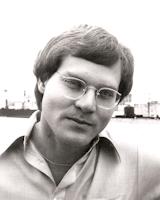 The changes within religion represent a massive cultural shift. Sometimes it seems like that shift began only recently. But as with any cultural movement the seeds are planted long before in small events, easily forgotten. On June 25, 1972, an important first step was taken when William R. Johnson was ordained as a minister by the United Church of Christ. He was the first openly gay person to be ordained in any Christian organization in the world. In 1974 Johnson co-wrote with Sally Miller Gearhart the book “Loving Women/Loving Men: Gay Liberation and the Church”.

Here is a link to a documentary on YouTube about William Johnson and his ordination. It’s about 18 minutes long and is called “A Position Of Faith”.

Reply CATHY CRONIN
4:55 PM on July 20, 2013
Dennis, finally got around to watching the film you linked to --- I enjoyed it more than I expected to :-) I found this profile of Bill - http://www.lgbtran.org/Profile.aspx?ID=3 - which you may, or may not have come across. Boy, he sure has had a very active career, with a finger in every pie imaginable! He just officially retired at the first of this month. Thanks for pointing him out to me --- I love a good story :-)

Reply Jellybean
2:26 PM on July 12, 2013
I was not raised in religion, but chose it in my teens. I was a church organist for many years. Then I started to study the Bible and religion in general. A couple of years ago I finally decided, in my view, that the Bible is a book of mythology. I believe that there is a God, or at least a Creator. I now believe in reason alone. I am a Deist. Deist believe that one is born gay and a gift from God. Our Creator does not make mistakes.

On another note, if your will study our Founding Fathers, you will find many of them were Diest. Our Declaration of Independence says "Laws of Nature and of Nature's God". That is not the same as the God of the Bible.

Reply John
3:49 PM on July 11, 2013
Some of this is laziness on our parts, some of it is how our opposition expresses itself and part of it is on our religious allies. Our religious opponents tend to identify themselves as "Christian" without any sort of denominational qualifier so when we talk about them we tend to use the same language. I myself generally don't say "Christian" when talking about them. My preferred term is "lunatic" or sometimes "asshole".

Our Christian allies seem more likely to identify by denomination rather than the generic "Christian" which has the effect of making religious support for gay equality feel fractured. And there are also divisions within denominations so we can't really make statements like "Lutherans support gay equality" because large segments of Lutherans don't (not to pick on the Lutherans; other denominations are similarly fractured). They have ceded the word "Christian" to the radical right.

I tend not to engage with religious types because I have no patience with it or them. They are fundamentally (pun intended) unable to grasp the simple notion that their religious rights end where my personhood begins. Nothing will change their minds and they will literally have to die before they stop burdening humanity with their hatred.

Reply Dennis Stone
2:08 PM on July 10, 2013
Cole - Yes, it bothers me a lot when gay people rail against religion in general, overlooking all the supportive churches out there. The Christianity issue really comes down to one thing: whether one believes the Bible is actually the literal word of God. If so you have to believe that homosexuality is a sin. (Though there is room for interpretation even there.) I grew up in a strong Lutheran home, and I realized in 8th grade that it made literally no sense to believe the Bible is God literally speaking. You can argue that only if you've turned off the rational part of your brain. Though even beyond that, a Christian who DOES believe the Bible is literal still should have no problem granting everyone their CIVIL rights.

Reply Cole
1:31 PM on July 10, 2013
Dennis, this is such an excellent point. As Ulysses and I have argued for a long time on AfterElton, we are playing into our enemies' hands when we speak of Christianity as being anti-gay. A wide variety of religious organizations in the US have open arms when it comes to gay members. One of the most beautiful churches in my old neighborhood flew a huge gay pride flag out front every June. Bigots try to say that promoting gay rights is anti-religious or anti-Christian, but it is only "anti" to THEIR version of religion. They are more than happy to trample on the religious freedom of any church that wants to sanction the union of two people who happen to be of the same sex.

When someone argues that "America was founded as a Christian nation," I counter, "Yes, primarily by Episcopalians, and we have a gay bishop now!" If they then try to argue that MOST churches condemn homosexuality, you can always respond, "Maybe most, but CERTAINLY NOT the best!" (The "best" obviously encompassing more than just Episcopal, just to be clear.)