The Demonization Of the Straight Community

Recently, a Tumblr user named ShutTheFuckUpStraightPeople responded to allegations that they were displaying heterophobia with this:

"Heterophobia cannot exist BECAUSE STRAIGHT PEOPLE ARE NOT OPPRESSED ON THE BASIS OF THEIR SEXUALITY. Being mean to straight people is nothing more than that. Being a bit mean. You don’t get to make a comparison between THE LONG TERM OPPRESSION of gay people and a few people being mean on isolated occasions. Regardless, such conduct is a reaction to the oppression exerted by heterosexuals."

This person has displayed a frustration and rage with straight people as a whole. Not because every single straight person hurt them, but because (presumably) some have, and they see fit to group the rest in with those.

This is not a unique phenomenon. One doesn't need to look far into Queerty, Huffington Post, or Tumblr to find a large handful of articles displaying all caps rage at STRAIGHT PEOPLE in general. A May 2012 Queerty article recounted the story of a straight couple on a date in a gay bar who were kicked out solely for being straight. One reader commented: "Hets have been invading our spaces for far too long. They make no effort to make us feel welcome in their places, yet they expect us to bend over backwards to accommodate them in ours. It’s typical heterosexual arrogance, and superiority. Kick ‘em out."  No mention is made of straight people not being one homogenous mob, or the couple in question likely not being the least bit homophobic. 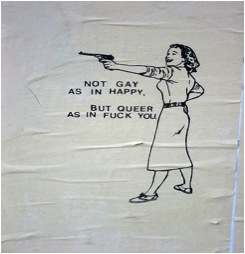 The gay rights movement was founded on camaraderie and discovering other people like yourself. Since gay people are not solely born to and raised by other gay people, safe spaces and gatherings had to form for the Mattachine Society to congeal and the Stonewall riots to occur. In an age where having sex with people to whom you were attracted was illegal and likely would lose you every straight friend you had, self-segregation was, to a certain extent, necessary for healthy gay lives.

This is not that age. Today's children are not their forefathers. I never seriously hated myself for being gay, or doubted that I would be able to have a husband. My two years of denial were mostly derived from confusion that I could be gay, as opposed to being like other people.

By the same token, my classmates have never hated me for being gay, or even cared that much. When I went through a brief, vigorously political phase in 9th grade, it was straight classmates who pulled me aside and reminded me: "Paul, you are too interesting of a person with too many things to say and do to let this one thing define you." This realization helped me to grow and spend my teenage years studying and discovering my passions.

I am not worse off for having spent my first four post-closet years outside of gay ghettos. I still got to make dirty jokes and have celebrity pictures in my locker. I had two boyfriends, both introduced to me by straight friends. I know I have benefited from forming several strong male friendships without the specter of romance complicating matters. Those friendships have enriched my life.

My straight friends have challenged me as a person, forced me to look at who I was and what I really wanted from my life. Neither of my (short-lived) relationships did that.

So why is it necessary to hate them as a group for the crimes committed by an ever diminishing portion of them?

Reply Jellybean
1:54 PM on February 14, 2014
On the gay bar issue. The only one in our town has many straight people come in and mingle with the gays. One straight man, who had been a Marine, defended many gays guys when some one wanted to physically attack them. I mean this man would throw them to the floor and they were out-of-there. We even had a straight couple spend their wedding evening in the bar. They said that most of their friends were gay and they enjoyed the atmosphere.

I like having straight friends. I was so disappointed what my best friend in high school told me he was gay. I thought that I had made a straight fiend. He never knew that I was gay. So you will have the proper time reference, I'm in my 70's.

Reply Hue-Man
1:26 AM on January 29, 2014
I think you're understating the risk if this anit-straight attitude becomes more generalized. The advances - in places often unexpected - in the past decade have happened because straight people have been introduced to gays and lesbians either in their daily lives or vicarously through TV and movies. It would be sad if a handful of malcontents reversed this progress.

On the issue of straight people at gay bars, I'm a big tent person who would welcome allies. At the time, I'm sensitive to the risks that terrorists - there's no other name for them - would use that openness to attack gay patrons and their friends.

BTW, "congeal" has very negative connotations for me. Gather, congregate?

Reply PaulR
11:38 PM on January 28, 2014
I read some of the other stuff on that site that was linked to. It was rather scary, actually. I think there are always going to be fringe people on any issue. But that person seems a bit out there. And doesn't understand the concept of "phobia". It doesn't have anything to do with how much the group has been oppressed. If you dislike all straight people just because they're straight people you are expressing heterophobia.