So we open on Patrick and his co-worker attending the release party for the game they just finished designing. Patrick is presenting his issues with representation in the video game world, and as he is making his point – jackpot! First sighting of Russell Tovey! I’ll admit he was one of the reasons I’ve been excited to watch this show. He’s a pretty good example of a new millennial out actor and this is his first time playing gay, ever. [Editor’s note: I was really surprised by that, but it’s true. I looked It up!]

(Before proceeding I’m going to take a detour to raise a sociological issue. Patrick’s co-worker is played by an Asian actor who seemingly was hired to represent all the Asian people who work at tech companies. However, it would be odd for the show not to cast any Asian actors when casting for a videogame company. The statistics show that, and yet the character gets pigeonholed with being a token individual. What is the line there and when do we as an audience accept or reject someone’s presence – the lack of which would be odd – who appears to be bred of tokenism?) 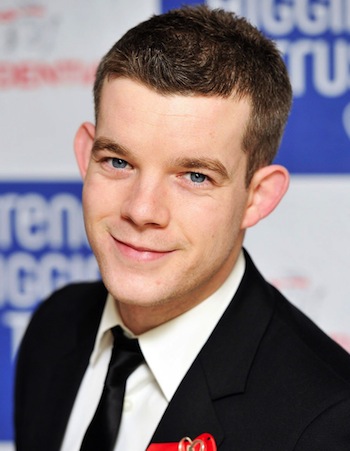 Tovey’s character, Kevin, is questioning Patrick’s reasoning for always playing video games as a female. Patrick responds with an explanation about being an outsider and therefore playing as an outsider. His response is also strangely antagonistic. Anyone who has seen a preview for the show knows that Patrick asks Kevin out so I’m not sure what this weird pseudo-tension the writers are creating here is meant for. As the party continues Patrick semi-stalks Kevin, and decides he wants a piece of those adorkably large ears. The scene where Patrick and Kevin finally begin to seriously interact has some of the most phallic imagery that has been on screen outside of an actual gay porn as the two men are playing a video game while straddling actual torpedoes. (At this point I should probably mention that this release party is happening on an actual ship, because, why not?)

Patrick attempts to clumsily determine Kevin’s sexuality, and again bounds into the waiting arms of cultural insensitivity like a golden retriever happy his owner is home. If this becomes a consistent thing I’ll admit it’ll make it hard for me to like Patrick. Kevin is not the least bit confused by the line of questioning, and comfortably replies that he is, in fact, a homosexual. Then he drops two bombs on Patrick: one, he has a boyfriend; and two, he’s leading a development team for a new game, one that Patrick wants to be a part of. Honestly, this just puts Patrick and the audience out of their misery. I’m clearly starting to understand why Patrick is still single. He may be the most awkward human being alive when it comes to flirting.

We meet up with Dom and Doris heading to what I can only describe as a Bollywood jazzercise class, during which Dom drops a bomb of his own. He has decided he’s finally going to open his own restaurant. Doris asks the question I have, “How?” and we are simply left with the fact that Dom has his plans. Meaning, he has no idea, but is feeling restless and can’t stand just accepting his lot in life any longer.

Agustin’s story this week is pretty truncated, and begins by giving us the first little fight between him and Frank. Frank is trying to be helpful in all the wrong ways, and Agustin is being a touchy little ass about it. Honestly, I see two options in Frank’s future next season (if there is a next season): either he gets promoted to a series regular character, or he’s gone. For now he has served to create some angst for Agustin, which he carries over into work. He puts his foot in his mouth and gets fired. He then promptly runs into a (very attractive) prostitute in the coffee shop where he’s eating away his feelings. While at first I was certain the interaction was going to end with Agustin cheating on Frank, as soon as it’s revealed that the guy was a sex worker I immediately knew it was going to end with Agustin deciding to join the trade, probably not this week but definitely soon.

Patrick awkwardly (really, I think I might just stop typing that; if I type that Patrick is doing something just assume that it’s awkward) tries to apologize for his interaction with Kevin the night before, and to grovel for a spot on the development team. The next bit of interaction seems slightly unbelievable to me, but is nonetheless incredibly fun to watch. Kevin points out that they log everyone’s internet traffic while at work, and Patrick is surprised. Because, of course, a programmer for a gaming company doesn’t realize that large corporations track employee internet usage. That’s just so unexpected. Either way, Kevin gets a lot of fun pointing out that Patrick seems to spend an inordinate amount of time on OkCupid and Manhunt while at work, and the shit-eating grin on his face at Patrick’s reaction is equal parts adorable, maniacal, and sexy.

Dom has lunch with Patrick to share the news that he plans to finally start his own restaurant. Patrick isn’t quite done freaking out about Kevin, but takes enough time off to support Dom with his endeavor. Dom gets his first bit of bad news when the chef friend he wants to work with him turns him down. To ward off his creeping depression he turns to his vice of choice, sex, and heads for a bathhouse. He ends up in a steam room with Lynn (Scott Bakula), who is missing the days of yore when hooking up at a bathhouse included conversation. We get some nice exchanges and an open ended invite for “lunch or something” from Dom. I do hope that the relationship they’re teasing between these two is intended for actual growth in Dom and not just an “older guys can be sexy too” storyline. That is obviously true, but a little one-dimensional.

Patrick comes home to find Agustin sulking on his couch, and he continues to freak about Kevin. Agustin then has his existential meltdown regarding his artistic identity. After which we get to see Patrick delete his OkCupid profile while Facebook-stalking Richie (the barber he met on the train in episode one), while Augustin stares pointedly at the prostitute’s business card (yes, business card). The writers do enjoy pointing out how aimless the three main characters are.

The episode ends with Patrick getting the spot on the team, and Kevin admitting that he was always going to get it. He was just having a little fun.

Of the three main characters this week, Dom was the only one I actually liked. Agustin was pouting in all the least attractive ways, and Patrick’s almost pathological lack of understanding of social cues was off putting. That doesn’t mean I didn’t like the episode, and I think we were supposed to become a bit annoyed with Patrick and Agustin this week. Whether it was worth it will depend on how the characters respond to their circumstances in the coming episodes.

Reply John
7:38 PM on February 6, 2014
In fairness, there was no mention of it in his first appearance and in the second was one scene. Easy to miss especially if you don't watch Doctor Who.

Reply Dennis Stone
6:49 PM on February 6, 2014
Hmmm....I had thought he had played gay before myself, but couldn't recall what he was in. A story on HuffPost Gay Voices on January 23 says bluntly: "He's never played gay before." That was my source when I said I had looked it up.

Reply John
3:26 PM on February 6, 2014
Tovey played gay in two episodes of Doctor Who. His character, Alonzo, was fixed up with Captain Jack Harkness by the Doctor.