(Editor's note:  This article was originally published by Outports on February 19.  That's a terrific website that covers all aspects of sports from a gay perspective. Check it out here.)

It was just another night at practice under the lights of the Rec SportsPlex for the Demented Ultimate Freaks of Florida State University. We had finished our warm-up run, and we were in a circle stretching. As tends to happen at this point in practice, the guys started talking to those nearest them as our captain lead us through the exercise. Since these are college-aged guys the conversation turned to the typical topic: girls. I wasn’t really participating and I think in an effort to include me the guy right next to me turned and asked if I had a girlfriend. This is how my coming out to my team began. It wasn’t by sitting them down and announcing it to the squad; it was simply by being honest when questioned. 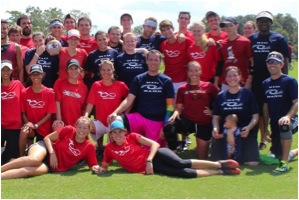 Lane is in the center with the rainbow sleeve.

My initial response was a simple no as I waited for the follow-up questions. I wasn’t sure where exactly the guy would go next, but I was certain the conversation wasn’t over. He continued by asking me how long it had been since I’d had a girlfriend. I pondered for a moment while I did some math, and I responded: "nine years." I will admit that I got some amusement out of his reaction. He seemed almost physically hurt while trying to imagine nine years without romantic attachment, and he proceeded to the obvious follow-up: "why?" And then it hit: "I don’t date girls." He had a simple reaction, "Oh." Which was both a relief and somewhat of a surprise for me.

I was never an athletic kid growing up. Some of that had to do with the fact that I grew up in a rather unathletic family so it was not something that was ever really mentioned or offered. My first real exposure to athletics was the summer between my fifth- and sixth-grade years. I had a friend who played baseball in the city league and he invited me to play with him. It turned out that we signed up wrong to be placed on the same team, but I played anyway and ended up having a lot of fun. I enjoyed the year and I grew quite a bit as a player over that season.

This experience got me interested in athletics in a way I hadn’t been before. The sport I was the most attracted to was volleyball, but the responses I got weren’t great. I was told that it was a girl’s sport and that a real man doesn’t play volleyball (mind you, I was 12). The truth is I couldn’t have played anyway; due to a combination of budgetary and Title IX considerations volleyball at the middle and high school levels was only offered to females, but this reality didn’t make the reactions any less demoralizing. At the same time, gym class began and so did the locker room antics of boys. This inevitably included some amount of ensuring that no one in the room was gay, or that if they were they didn’t say anything.

Add into that mix the fact that I was beginning to discover my sexuality and I lost my taste for sport about as quickly as I had acquired it. Instead I began pursuing my other interests, the ones that were offered in my home: the arts. It would take years before I ever really considered playing a sport again.

In 2009, during some time away from school, I joined AmeriCorps, which I stayed with for the next 2.5 years. During that time one of the two programs I was involved in had a physical training requirement and every so often we would have a "fun" PT day. This is where I was introduced to the sport of Ultimate. This was a much more loose and disorganized version of the game, but I enjoyed it nonetheless. This didn’t inspire me to run back to sport, but it laid the foundation.

When I moved back home after I finished my AmeriCorps term it turned out that one of my friends had become the chair of Tallahassee Ultimate, an organization I hadn’t realized existed. She invited me out to play in the league and at first I accepted her invitation without hesitation. Not long after, I began to experience concerns. Some of these guys and gals played for the university and their approach to sport resembled the atmosphere that had pushed me away in the first place. However, two things had changed in me. First, I was no longer figuring out who I was – I was an out gay man and I wasn’t going to sacrifice that for the sake of a city league. Second, I was only there to have fun, I wasn’t attempting to become an elite athlete so I would only let my sexuality become an issue if someone else made it an issue.

After some time with the city league I was invited to come out to the team at Florida State and continue developing, which I was more than excited to do. Which brings us back to the beginning. My sexuality still wasn’t common knowledge and "the question" hadn’t happened yet. This was somewhat calculated as I wanted to integrate a little bit and I didn’t want my sexuality to be a big deal but I was also still dealing with some of my own reservations about the athletic world, but as we saw in the end all I got was an, "oh."

That was it. In fact the majority of the guys were completely underwhelmed by the revelation. A couple had very funny reactions as they tried to be supportive without being offensive and just ended up doing the "open mouth, insert foot" bit, but I could tell it came from a good place. It was mostly endearing to watch them fumble all over themselves. After that things continued on without much change. The guys who didn’t know me very well continued treating me the same way they always had. The ones with whom I had become friends just altered the jokes and good-natured insults that are such a traditional part of dude interaction to be appropriate to my orientation. Since then I have been selected to captain one of our squads at FSU, I’ve captained three times for the city league and I was a player/coach for a club team this last summer. I have been accepted completely for who I am at all levels of Ultimate in the city of Tallahassee.

While I don’t think I could pinpoint the exact cause for the openness of the sport I have my ideas. For one, Ultimate has been such a grassroots sport for so long. It is only within the past year that we’ve received mainstream recognition from the likes of ESPN and the IOC. When as a sport you constantly have to fight for legitimacy I think it attracts a certain kind of individual. These players are in it because they have passion for the game and all they require in return is an equal amount of passion. If you can give that, if you truly want to be there, then that seems to be the main thing that matters. Something else that strikes me is that Ultimate is a young sport so it is populated by younger people. If there’s something we’ve seen across this country it is that the younger generation is ready for equality. They don’t tend to view someone’s sexuality as important to their identity. So why would it be important to their athletic ability?

Those two things seem like good explanations for it but one point that I think truly illustrates the spirit of openness in Ultimate is our divisional structure. In Ultimate there are three divisions: open, mixed, and women’s. Yes there is a separate division for women who want to play on exclusively female teams but unlike other competitive sports our structure is set up so that there are teams with both men and women actively playing together in our mixed division and our open division, typically the men’s teams, does not exclude women. Ultimate does not have a male only division of the sport. Yes open teams are typically all men but the rules don’t specify that they must exclude women and I have played open teams that have included females on their roster. It doesn’t surprise me all that much that a sport that eschews the typical gender segregation of "elite" sports would be open to gay athletes.

Whatever the reason, I couldn’t be happier to have found Ultimate; it restored my faith in sport.

Lane Forsman has his Bachelors in Social Work from Florida State University and is currently completing his Masters in Social Work at FSU. He plays on DUF Lite, the FSU B-team, is a captain for Tallahassee Ultimate, and Player/Coach for the club mixed team Big Bang. Upon graduation he hopes to work for either the VA or the United States Air Force as a Clinical Social Worker. He can be reached at [email protected]