The explosive season finally came to an end this week. No Gallagher was left untouched as they all got scenes that set things up for their individual storylines for season 5. 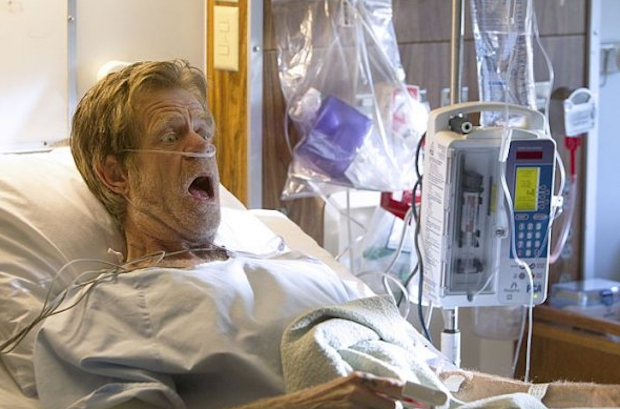 Frank looks like he's reacting to the shocking ending to season 4.

Fiona finally did the right thing this episode. She refused a pill an inmate gave her, and that led to her testing negative on a surprise drug test. She was released from jail because of over-crowding, and I look forward to some positive developments for her next season. I have had my fill of watching the “bad Fiona.” I want her to learn from her mistakes and become the responsible and sensible adult she really is, especially after Ian's reveal.

Fans have been expecting Ian to take after his mother since he returned. He entered the depressive stage of his illness. Seeing Mickey being concerned about him hurt me right in the feels. He kind of got into a fight with Fiona because he didn't want Ian to enter an institution. I want Mickey to understand that Ian needs all the help he can get. I don't want him to make things worse for his boyfriend and then regret things in the end. Seeing the Gallaghers try to get Ian out of bed was tear-jerking. There are rumors that Ian's condition was triggered because of something that happened when he was away in the Army. I am ready to sit through the whole “Ian being bi-polar” ordeal and the drama that ensues as long as he and Mickey show up in every episode next season.

I'm angry at the show for not addressing Mandy being beaten by her boyfriend. I think they will touch on that next season. Lip seems to be in an awkward position trying to juggle his feelings for Mandy and the new girl Amanda. As far as I know, I don't see Amanda and Lip working out. I'm just worried about the damage the show might do before the relationship comes to an end.

Frank doesn't remember marrying Sheila. I mean, who can blame him? Sheila was unable to adopt the nieces and nephews of Roger Running Tree, which didn't come as a surprise. I hope her character gets more to do next season. She has experienced mental illness first hand. So, maybe she can help Ian cope with things?

Sheila also told Sammi to go away, but that didn't happen and Frank's daughter moved into an empty plot near Sheila's home.

Fiona's ex-boyfriend - who we all though was dead - made a surprise appearance at the end of the episode. As long as he doesn't cause any more trouble for the Gallaghers I'm fine with it.

What did you think of the season finale?

Reply Hue-Man
10:44 PM on April 9, 2014
Lip was caught between the two Americas - the world of the 1% where Amanda casually tells the tailor to have Lip try on the Prada followed by the surreal scene of the Sorority Shindig. In contrast, Mandy in her waitress uniform forced to say "Sir" and pretend not to know Lip in order to continue earning her $7/hour plus some small share of tips. Lip has an entree into that 1% world but only if his 99% world doesn't interfere with him graduating college. I welcome the return of Steve/Jimmy/Jack, not only because he found a way to move from the 1% world he grew up in, to find his way in the Gallaghers' world. (BTW, I thought Fiona's P.O. set up the pill offer as a test.)
I struggle with Sheila's character because there is no clear thread. The UK Sheila was simple but caring, without being a single note character. Chicago Sheila usually seems more aware then is shocked when her adoption is turned down. Similarly, she was constantly afraid of leaving the house but today shows no residual phobias. I'm confused.
I don't want to end the season without another Mickey (Noel Fisher) rave. The scene in the Alibi was like an over-the-top IGB video - caring for and coping with a mentally unwell loved one should flex his acting skills even further next season.
Thanks for your recaps this season.

Reply Yiannis
7:26 PM on April 9, 2014
Hey Farid! I'll miss your recaps. Since I left an extensive comment on the Backlot recap (my nom de plume there is Lion King), I hope you don't mind if I repeat much of the same here:
This episode... simply awesome. All threads were different countdowns to despair: yet there was hope in it all. Through love and understanding, through the "we are family" mantra. Even the secondary characters - it was uplifting to watch the "butt buddies" scene in a tough neighborhood bar. These people accept their own, warts and all. Ian and Mickey broke my heart, along with everybody else's. There's hope that the Lithium will work and that Ian will be OK again. I'm sure Mickey will provide a stress-free environment for him, so that he can balance himself. I'm bipolar, medication keeps me absolutely functional. I just try to avoid stress and conflict. On other matters, Debbie was great in this episode too. The only storyline that was out of place was the one with Sheila - and it's a pity, I usually enjoy Sheila. No feelings for Steve/Jimmy/Jack either way, let's wait and see what they will do with him. Also Carl is maturing, albeit in a completely "Shameless" way. However, if you recall little psycho Carl of Season 1, you can't help but care for present-day Carl, who cares enough to want to visit Fiona, who is always there for Frank and who bore his first love pains with stoic dignity. By the way, have you noticed, Amanda and Mandy is the same name (Amanda being the "posh" version). I wonder if this is deliberate and where they're going with it.