A couple of nights ago I was aimlessly flipping TV channels, and I came upon a show on Palladium called "MTV's New Artists To Watch." I'm always up for that sort of thing, so I hung around to see if I could discover a great new band or singer. The band playing was called "Rixton," and I had never heard of them. (Though when I looked into them further I realized I had many times heard their catchy single, "Me And My Broken Heart.")  They were all rather cute, and the song, "Make Out," was infectious.

At one point the lead singer, Jake Roche, walked over to the super-cute bassist, Danny Wilkin.  He grasped the back of Danny's head, their faces less than two inches apart, as he sang, "I just wanna hold your hand, I just wanna pull you closer."  Danny nodded eagerly several times as the crowd's cheers rose. 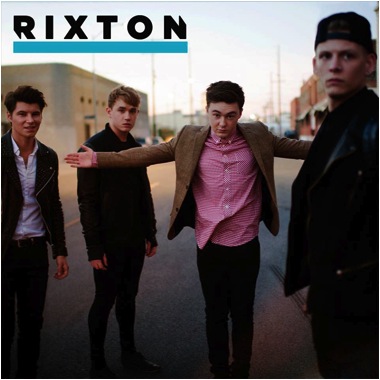 Hmmm....what do we have here, I thought, a gay boy band I've never heard of? I did some research, and it appears all the members are straight. (There appears to be a bit of ambiguity about Jake.) So what we actually have here is a quintessential example of the comfortable, open way in which the Millennial generation views sexuality. Imagine the Backstreet Boys or the New Kids On the Block casually having an overt homoerotic moment on stage, with the crowd cheering in appreciation.

While looking into the band I discovered the following video:  https://www.youtube.com/watch?v=Q5eksUxnHKc

Guitarist Charley Bagnall tries to break the world record for most double cheek kisses in 30 seconds by kissing drummer Lewi Morgan.  They fail miserably, but it's adorable. At the end Charley says to Lewi, "I'm just gonna cuddle you," and they have a big hug.

And then there is their video for "Make Out," which was the first video they made. It spoofs some of the more prominent videos of 2013, including "Wrecking Ball" by Miley Cyrus, "Blurred Lines" by Robin Thicke, and videos by Rihanna, Katy Perry and Justin Bieber. It includes many homoerotic moments, and a fair amount of skin, all done in a playful and fun way.  There's a section toward the end where they sing "Make out!" over and over again during a succession of scenes where couples of all types are passionately kissing.  Including two girls and two guys.  Check it out:  https://www.youtube.com/watch?v=eHQkaH4J4Ps

Right-wingers and evangelicals and others can try to hold on to their anti-gay attitudes all they want, but they are doomed. A lot of gay people don't agree with me, but anti-gay sentiment as a meaningful social phenomenon in the United States is in its death throes. (Though significant parts of the world will have to wait a bit longer.) As in all death throes, the process is throwing up dirt and fire and noise, but the outcome is inevitable. You can see it in the shockingly swift way in which marriage equality is sweeping the states. You can see it in the fact that almost all companies of any size have sexual orientation protections written into their policies. You can see it in Michael Sam's remarkably seamless integration into the St. Louis Rams football team. You can see it in the fact that any celebrity who says anything anti-gay is instantly turned into a pariah. And you can see it in the utterly casual way in which Rixton treats same sex attraction, a way reflective of their generation.

Reply Ulysses Dietz
7:43 AM on August 11, 2014
I actually seem to like boy bands. Clearly I like the cute boys, but there's always at least one song that appeals to me. I like it better if they can manage to make their songs neutral enough to embrace the unsung fantasies of their gay audience...and I like it best if one of them comes out. I'm waiting for someone in Rixton (and Bastille, for that matter) to come out.

Reply Dennis Stone
2:32 AM on July 28, 2014
Hi Hue-Man, Thanks for the encouragement. Trust me, I still believe strongly in this idea, and am hoping to eventually get to where I can do this "right."

I agree with you about boy bands. A lot of people on the Backlot are very dismissive, but I don't see the rationale for that. The Backstreet Boys, N'Sync, One Direction, etc. were and/or are very talented. And now Rixton is talented as well.

I think your overall analysis of the societal situation is right on. What some gay people don't understand is moving from "horned beasts" to "regular guys" in society's mind is something that is inevitable to be a gradual process. Unstoppable, but gradual. It's actually been much faster than I expected, considering where we were in the 80s.

Hue-Man says...
Sorry to hear of your travails. I won't presume to tell you how to do your job but if you occasionally post a paragraph or two, you'll have tangible proof that there are more than two of us reading what you have to say! You may even get a hug or two...

Reply Hue-Man
2:06 AM on July 26, 2014
Sorry to hear of your travails. I won't presume to tell you how to do your job but if you occasionally post a paragraph or two, you'll have tangible proof that there are more than two of us reading what you have to say! You may even get a hug or two...

I don't share the general disdain for "boy bands" - I was working in Paris in the mid 1990s when boy bands went to Europe to learn their craft, shoot a few music videos, get used to audiences, and succeed or fail. Backstreet Boys got the most screen time on MTV Europe but French, English, and Dutch bands all had their turn. Boyzone was probably the biggest of the bands from Europe. I appreciate that most were "manufactured" but that doesn't take away from the longevity of some and the obvious talent of some band members.

I'll be crass and suggest that portraying a gay vibe is good for business for today's boy bands. Teen girl fans like it. Teen boys accept it. I assume a positive feedback loop takes over where the fans get more comfortable, the band gets more comfortable, etc.

This new sensibility in Straight World is what's leading to the changed environment that you referred to. There aren't enough LGBT folk alone to get to 50% marriage equality support. My guess is that same feedback loop is at play - lesbians and gays are not the horned beast they've been made out to be, the general public sees more of them and gets more comfortable, which encourages more LGBT people to raise their visibility, etc.

Reply Dennis Stone
12:56 PM on July 22, 2014
Hi Ulysses! It's nice to know that after not posting for awhile I still have readers (or at least one reader!) I had the second worst virus of my life, a huge kerfulffle at work, the death of my cat (after 20 years she was family) and a couple of other things all happening at the same time. Interesting comparison to Maroon 5. I read that somewhere else, in a piece trying to decide if Rixton is a "boy band" or a pop/r&b band. Apparently if we classify them as the former we can't take them seriously, but if they are the latter then it's OK to like them. Well, I always go my own way so I'm going to like them!

Ulysses Dietz says...
Hey, my friend. I've been pondering the cuties of RIxton ever since I heard "Me and my Broken Heart," which sounds just like Maroon Five (only cuter). I see this casualness in my kids, too, and in their friends--but given who I am, that's to be expected. Acting gay-ish is this generation's way of being subversive--but it reflects a genuine openness to others' sexuality that is encouraging and endearing.

Reply Ulysses Dietz
6:23 AM on July 22, 2014
Hey, my friend. I've been pondering the cuties of RIxton ever since I heard "Me and my Broken Heart," which sounds just like Maroon Five (only cuter). I see this casualness in my kids, too, and in their friends--but given who I am, that's to be expected. Acting gay-ish is this generation's way of being subversive--but it reflects a genuine openness to others' sexuality that is encouraging and endearing.