Blog, November 17, 2014: What the Liberals Are Missing About the Elections

The recent U.S. elections were a disaster for the Democratic party, and therefore for those of us with progressaive ideals. There has been a lot of talk about why the country moved in that direction, and what it means for the future. But almost all of these post mortems have been either essentially wrong or inconsequential. We are missing the biggest factor, and if we continue to miss it we will continue to shoot ourselves in the foot politically.

First, though, I want to talk specifically about the gay angle to the elections. It was interesting to me that this election had almost nothing to do with gay rights or gay marriage. And that's a good thing. The days when the Republican party attempted to drive conservative voters to the polls with fear of gays has passed. Republican candidates didn't try to demonize gays and then tie Democratic candidates to that demonization. To some degree that's the political version of what I've previously pointed out regarding sports, specifically in the Michael Sam case:  it has become socially and politically unacceptable to denigrate gay people. That's just the changing zeitgeist of the country, and there will be no going back.

Having fewer Democratic senators will have no impact on the gay marriage movement. In a mind boggling social evolution of surprising speed, there are now 33 states where marriage equality is the law of the land, with several more states on the threshhold. This issue has been and will be decided in the courts, not in the halls of Congress.

On a personal level the highlight of the election was the re-election of Al Franken, my home state senator, and one of my overall favorite senators. More about him in a bit, since his situation fits into my main point about what went wrong for many of the other Democrats. 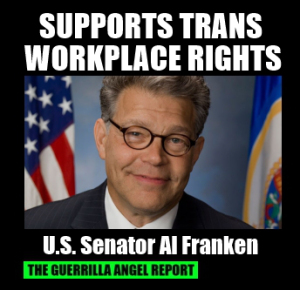 So what DID go wrong?  Pundits have said the main reason is that voters were rendering their dissatisfaction with President Obama, who has become unpopular in his sixth year (and to some degree justifiably so, in my opinion). Some progressives have said that Democratic candidates lost because they ran away from Obama, and should have defended him and focused more on traditional Democratic ideals. Others have said that the Democrats didn't communicate well enough how well the economy is doing. And then there's Obamacare, which is highly unpopular. There are also issues related to low turnouts in mid-term elections, few elections in liberal states, etc.

The basic answer, however, is this:  the Democratic party, and the progressive movement that to a large degree rides its coattails, is increasingly seen as a hodgepodge party of special interest voting blocks:  Hispanics, gays, blacks, feminists, "young people," etc. What's wrong with that you ask. Improving the lives and protecting the rights of the members of these demographic groups is obviously a good thing. Am I saying that the rest of society DOESN'T want to help and protect these groups? Am I saying that there is a society-wide conservative backlash against progressive ideals? No, that is not what I'm saying. If that were true, ballot initiatives on increasing the minimum wage would not consistently succeed.

But here's the thing. In this election 75% of the voters were white. Large numbers of them do not fit the common progressive description of "privileged".  Millions of them are poor or struggling to make ends meet. Those in the middle classes face diminishing real wages, job insecurity, fears about the future (both for themselves and for the country), health concerns, etc. They struggle with personal problems, insecurities, and disparities between hope and reality. Many of them see the Democratic party as an entity that doesn't care about their concerns and their needs, but rather only cares about the demographic groups that they think they need to get elected. To some degree it's interpreted as the party of "them" rather than the party of "us".

Mark Udall of Colorado played right into that when he talked so incessantly about women's issues that he became known as "Mark Uterus." And he lost.  Big. Does that mean that voters don't care about women's issues? Of course not. It simply means that a campaign so one-dimensional is a campaign that isn't focusing on all the other issues that people care about. It fits into the growing perception of the Democrats as the party that is so focused on interest groups that it doesn't care about the day to day needs of mainstream America. A lot of my fellow progressives have an involuntary negative reaction to the phrase "mainstream America." That is sad. And elitist. And, in the end, extraordinarily counterproductive.

One of the reasons that Al Franken won so easily was that he did not embody the balkanization of interest groups. Yes, he's a strong supporter of LGBT rights, women's rights, immigration rights, etc. But he looks at those issues as I do, as part of a mosaic of a common humanity, where those issues are just a part of an overall outlook and philosophy that values all groups. His TV ads focused on what he has done for individual people in his state, and for the legislation he has worked on. He stressed that he worked with Republicans to craft legislation that would have broad general benefits. In other words, his goal as a Senator was to help people - all people. One memorable ad had a veteran talking about how Franken had helped him and fellow veterans. He closed by saying that he was a Republican, but he was voting for Franken.

I've been a progressive for my entire life, and one of the main reasons has been my desire to BLUR the distinctions between people, not to accentuate them. To bring all people into one big unified whole, to protect and enhance everyone because of the universal humanity that binds us together. To a lot of people the progressive movement and the Democratic party are seen as separating people into interest groups, and then focusing their energy on those groups, at the expense of society as a whole.  At their expense.

America has a relatively small number of right wing goofballs, and a small number of "true believer" strident progressives. Most people fall along a spectrum between those poles. Both the right wing and the left wing over-estimate their numbers, to a large degree because they are so prominent online. Those of us on the progressive side have to wake up to how we're being perceived by the vast middle. We have to essentially take the Al Franken approach.  Care about everyone, work for everyone, and within that context be agents for the change we'd like to produce. We're all in this together. Let's craft a politics that reflects that reality.