1. As I exited the local public library a couple of days ago I stopped to pick up the latest copy of "Lavender," the free Minneapolis/St. Paul gay magazine.  It's one of several free local magazines offered in the entryways of most local libraries.  On top of the pile was a sheet of white paper enclosed in a clear plastic sleeve.  On the sheet, in large letters, was a Bible verse from Isaiah relating to repentance and getting right with God. Momentarily taken aback, it took only a moment to realize that someone was trying to save the souls of those sinful, God-forsaking gays. I removed the sheet, took a copy of the magazine, and debated how to proceed.  Then I saw a second copy of the sheet, about five issues down in the pile.

After a moment of reflection I felt myself more bemused than angry.  I certainly wasn't threatened in any way. I did have a sense of being transported back to an earlier time in my life, when such things were more common and reflected a widespread belief among the stolid, traditional denizens of this area.  Today we have multiple churches marching in the Pride parade, and even the most rigid, evangelical Christians that I know are nothing less than friendly and supportive toward me. I assume not all would vote for marriage equality, but religion no longer creates in most people a fear of gay people, or a need to change them.

In that sense the printed Biblical admonition actually reminded me of how far we've come. Something that was previously commonplace and reflected mainstream thought is now rare and jarring in how out of place it is. I smiled, felt sorry for the poor soul who felt he or she had to act in that way, and continued on my way with my new magazine.

2.  Hillary Clinton sure stepped in a big pile of LGBT poo when she recently commended Nancy Reagan for her supposed advocacy and consciousness raising relating to AIDS in the 1980s.  Oops.  I lived through the AIDS crisis, and one of the most frustrating and galling aspects of that era was the way in which President and Mrs. Reagan almost completely ignored the issue.  In fact, their friend Rock Hudson appealed directly to Mrs. Reagan for help in getting treated before his death, and she declined. The president didn't mention AIDS until 1987, six long devastating years after the disease began to decimate the gay population. 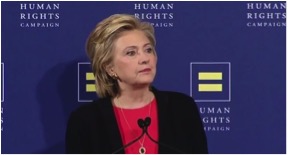 Hillary quickly apologized, and it seems obvious to me she simply made a mistake in confusing Nancy Reagan's work on behalf of stem cell research and Alzheimers with an AIDS advocacy that sadly never existed. I thought the resultant uproar in parts of the gay community was overwrought, though it certainly reflects the raw nerves and pain and loss that so many experienced in that era.  But I preferred the reaction of Chad Griffin, president of the Human Rights Campaign, who tweeted:  "While I respect her advocacy on issues like stem cell & Parkinson's research, Nancy Reagan was, sadly, no hero in the fight against HIV/AIDS." He set the record straight without rage and recrimination, and allowed Hillary to realize her mistake and apologize for it. And now let's move on.

3.  I discovered recently that the first country in the world to legalize gay marriage was the Netherlands in 2001. Part of me is dumbfounded that there was not one place in the world where gay people could marry until fifteen short years ago.  But then there is another part of me that is dumbfounded at how widespread equality now is.  Fifteen years ago no one would have predicted where we are today.

Some of the comments made by Dutch opponents of legalization in the years since are interesting.  Here is my favorite, from Hannie van Leeuwen, the head of the Christian Democratic party when legalization passed:  "At the time I opposed same-sex marriage, I was led by fear. Having seen so many happy gay and lesbian couples getting married, I realize I was wrong. I don't understand anymore what made me treat gays and lesbians differently from other citizens." I predict that will eventually become the most common perception in the United States by an overwhelming majority of those who have opposed equality.

4.  "Teen Wolf" has become complete and utter claptrap.  I got sucked in by the first three seasons, especially the first, and I keep watching, hoping for better but not expecting it.  I don't really even care much about Stiles anymore, and that's saying something.  When plot demands can be answered by illogic, when characters die and come back to life at will, when there is no real human feeling, when every supernatural myth we've ever heard becomes reality, when transformation from human to wolf becomes an instantaneous appearance of fangs and glowing eyes, rather than a dramatic and awe-inspiring metamorphosis, when.....  Well, you get the picture.