Larry Wilmore and Reclaiming the N-Word

Time marches on, and things change.  Go back in your mind ten years to the spring of 2006.  People were starting to think about the 2008 presidential race, and there were hopes that the country could possibly be ready for a woman president. After that, who knows? Maybe even a black president would be possible some day! Gay people were excited that a couple of years earlier Massachusetts had become the first state with marriage equality, and there were hopes that over the next few years a couple more states could be added to the list.

The reality of the past ten years is an American society that has changed more than we would have dreamed. The black president came many years, even decades, sooner than expected.  Marriage equality is the law of the land in all fifty states. And the transition - apart from extremely rare outliers such as Kim Davis - has been remarkably uneventful. The collapse of society envisioned by conservatives did not occur.  Imagine that!

I was thinking about how much has changed while watching the annual White House Correspondents' Dinner on April 30.  President Barack Hussein Obama was the star of the evening, and the featured guest speaker was black comedian and TV star Larry Wilmore. That situation would have been hard to envision ten years ago in the midst of the George W. Bush presidency. But how Wilmore ended his speech would have really freaked out our ten years younger selves. After talking about how much the first black president had meant to him, he closed this way:  "Yo Barry, you did it, my nigga." 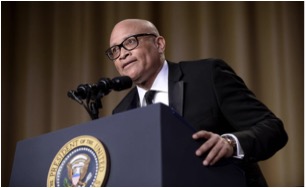 Well, that's not something you hear on TV every day, I thought.  Especially addressed to the president of the United States in a formal setting. Personally, it didn't bother me at all.  I lived through and helped contribute to the reclaiming of the word "queer," and I knew that younger black people had largely reclaimed "nigga" from its historically abhorrent original version of "nigger." The affection in Wilmore's tone as he said it was obvious, and the president did not appear to be bothered. At the same time I knew that the concept of reclaiming epithets that had been flung in hatred over the years was a controversial concept that many did not embrace. And especially so with perhaps the most hateful, abhorrent word in the English language.

Regarding the reaction of white people, it's my experience that a majority of straight white people don't get the concept of reclaiming words.  The less thoughtful ones seem to resent that they can't use words that members of the gay or black communities can. It seems hypocritical to them. The ones who actually think about the issue seem to be flummoxed that a group would ever want to intentionally use words that have caused so much pain through the years, and that they themselves have considered to be utterly objectionable. I think some occasionally sense an aspect of self-hate in people intentionally using slurs that have been so commonly used against them.  I picked up some of all of those reactions in the discussion that followed Wilmore's comments, and none of that surprised me.

I WAS rather surprised at the reaction of black people.  I expected that the majority would totally get and understand where Wilmore was coming from. A few might think that the occasion was too formal for an informal greeting of that type, and a few might worry about how white America would interpret it.  But I was surprised by how many were flat out disgusted.  And it certainly wasn't just the conservative commentators (yes, they exist!). Al Sharpton, Jonathan Capehart and Van Jones were among many well-plugged-in observers who were not happy with Wilmore.  Jones - a CNN commentator who I find very interesting, even when I don't agree with him - tweeted that he will never appear on any program with Wilmore as the host, and he included the hashtag #Disgraceful.

I guess this reclaiming words thing isn't quite as straightforward as I sometimes think, considering how successfully we've rebranded the word "queer." When I was a kid in rural Wisconsin that was probably the most hurtful epithet used for those awful homos. The reclaiming certainly didn't happen overnight, and there was a lot of resistance within the gay community, some of which continues to this day. Jonathan Capehart, who is gay, likely understands all that, and because of that I expected him to not have a problem with Wilmore's expression of a reclaimed word. Perhaps the history and power of the word "nigger" is so intense and so culturally significant that for some people it's simply a bridge too far.

But a lot of younger black people were fully on board with Wilmore. After the event I went through several online comment sections to get a feel for what people were saying. (Yes, I managed against all expectation to find a couple that had comments from people who appeared to not be brain dead!) In general, I found white people troubled (those that weren't overtly racist) and black people - especially those identifying as young - supportive. The simple logic was that Wilmore was using a term commonly used in the black community as a term of endearment, and was obviously applying it to the president in a spirit of affection and camaraderie. What's wrong with that? was the sentiment.

Sasheer Zamata of Saturday Night Live tweeted her support for Wilmore, and then addressed the controversy as a guest commentator on the "Weekend Update" segment. At the end of her segment co-host Colin Jost (who is white) asked if that meant people could now say the word. Replied Zamata:  "It's up to you, nigga."  I loved it!  Though I'm not sure "Weekend Update" co-host Michael Che, who is black, loved it. After Zamata's comment the camera went to Che for the next story. He did NOT look happy.  At all.  If his face accurately reflected his feelings, he was not onboard with Zamata using the word again.

Columbia University associate professon John McWhorter - who is black - addressed the issue for "Time" magazine in the larger context of the changing meaning of words over time.  It's an interesting piece worth a read.  He cites the word "holiday" as an example. It evolved from the phrase "holy day," but today has a much different meaning. "Nigga" evolved in the same way.  As McWhorter put it:  "'Nigga' is a word that developed from 'nigger,' but has a different pronunciation and also a different meaning. 'Nigga' means 'buddy.' To insist that to say 'nigga' is the same thing as saying “nigger” is like saying that “holiday” is to say “holy day.”

That's how I look at the concept of reclaiming words and of language in general.  Unfortunately, I've encountered many situations in different contexts where people are hung up on what words meant in the past, or on how they developed. They want to ascribe absolute meanings to them, when in reality words only have the meanings we give to them, and those meanings change and evolve over time. It's not precise, and it's sometimes not particularly good for accurate communication.  But it is simply how language works and how it has always worked.

I think the reclaiming of words is a great thing.  I'm glad we gay folk have reclaimed "queer." In addition to robbing the word of its hate and its ability to disparage, it's a perfect word to encompass the broader range of identities and outlooks in our broader community. I much prefer "queer" to "LGBT" or any of the expanded acronyms that people use. It's unifying, and, for me, has become empowering. Is it time to start reclaiming "faggot"???