When I was a junior in high school representatives of the U.S. Army came to our school. I don't recall all the details, but they offered rewards of some kind to the boys for taking a written test. (Women were still excluded from active service at that time.) I'm guessing it may have related in some way to recruitment efforts. I was a committed pacifist, opposed viscerally to all things military, and so I was one of three boys in the class to decline the opportunity. My brave decision made me feel really good about myself, and it certainly revealed how superior I was to my classmates.

In the first two presidential elections in which I could vote I was proud to cast my ballot for principled third party candidates since the Democratic candidates weren't sufficiently progressive. I also voted for a Socialist candidate for governor.  Again, I felt really good about myself. I could see beyond the short-sighted vision of "average" voters.

During college I decided it would fit in with my enlightened outlooks to join the Socialist Workers Party, and so I sent for information and an application form. I was well on my way to changing the world. 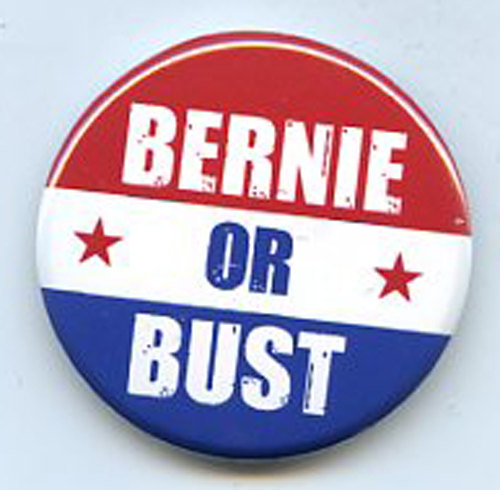 A funny thing happened along the way as I trod my righteous path. The first doubts arose when I read the materials sent by the Socialist Workers Party. I may have been fervent and a bit self righteous, but I could always think for myself. The tracts and position papers were mostly slogans and illogical dogma. The positions taken were anathema to the overwhelming majority of Americans, and had no chance of ever passing into law.  Worse, the arrogance behind the writing was overt and obnoxious.  Positions had no nuance, there was no room for compromise, and I was left with an overriding feeling:  it was all spitting into the wind, sound and fury indicating nothing, a tool allowing ignorant and intolerant people to feel smart and enlightened.

Unbeknownst to me at the time, I was at the beginning of the lifelong process of maturing. I was learning the importance of recognizing the complexity of issues, the need to openly and honestly look at the other side, the recognition that actually accomplishing something was more important than shouting and railing. By the 2000 election I recognized it was more important to vote for Al Gore than to indulge my teenage superiority by voting for Ralph Nader. Unfortunately, there were enough Nader supporters in Florida to give us eight years of George W. Bush and Dick Cheney, including the Iraq war, with over 4000 Americans killed and over 30,000 wounded, plus over 100,000 Iraqis (over 500,000 by some estimates) killed.

As I analyze the evolution of my thoughts and my philosophy I realize an important thing about my early days. There was certainly a large part of me that genuinely wanted to make the world a better place, but much of the dynamic was less noble:  it was about me more than about the goals I sought. That was a very difficult reality to accept, but the difficulty makes it no less true. One of mankind's most important and sought after needs is a positive and secure identity. A political crusade provides such an identity. A good political crusade not only provides a distinct identity, but it also allows one to feel superior to the rabble who can't see the truth like the adherent can. And who doesn't like the heady feeling of being superior to the riff raff around them?

I flashed back to my early days as I watched the Democratic Convention, and then read stories and watched videos about the Bernie Sanders supporters who were part of the "Bernie or bust" subgroup.  As a teenager or in my 20s I surely would have been a passionate Bernie supporter. And I would have detested Hillary Clinton, the establishment candidate who stood in the way of the righteousness I wanted to bring to the country. Today I like Bernie a lot, and philosophically I agree with much of what he wants to do. However, there are a couple of vital issues that need to be considered, but are rejected without thought by most Bernie supporters.

The first is that electing Bernie would not accomplish the goals that Bernie espouses. There is very little that a president can accomplish by himself. His supporters seem to operate under the illusion that if he is elected the wonderful world that he envisions would just magically appear. However, the reality is that VERY LITTLE of that world would appear. Congress is required for the implementation of anything important, and the makeup of Congress ensures a slow progression at best. It's almost a miracle that President Obama got the Affordable Care Act through, and even that required major compromise. Today passage of such a bill would be impossible. Bernie supporters could have rallies and chant slogans all they want, but it wouldn't accomplish anything. We would need an overall "Bernie revolution" that mirrored the "Reagan revolution" of the 80s before sweeping change could occur, and even then the constant Senate filibusters would forestall major changes. And at the moment there is absolutely no sign of a sweeping "Bernie revolution."

Second, the big flaw in Bernie's revolution is that expansive new programs have to be paid for. I want to raise taxes on wealthy people, but there isn't nearly enough money available in any achievable tax overhaul that would come close to paying for the entirety of what Bernie wants to do. Hell, we can't even get congress to raise the amount of income subject to social security taxes, which should be the easiest increase to achieve since the tax is regressive. It doesn't excite the mind and inspire the emotions to talk about paying for things, but when you move beyond teenage fervor that is something that has to be considered. That's just a fact.

Unfortunately, the bottom line is that the "Bernie or bust" people are all about slogans.  Yelling "no more wars" is extraordinarily simplistic, and hopelessly naive. It's a slogan, nothing more. It reflects my teenage gut reaction that all things military are inherently bad.  On the way home last Friday I was listening to my favorite radio talk program, hosted by a guy who leans left (he was one of the first media people around here to wholeheartedly support gay marriage). He was talking about the Bernie people, and dismissed them as living in "a dream-ass world of peace, love and harmony."  That's a world I want to see, and a world worth working toward. But it's not the world in which we live.

The aspect of the "Bernie or bust" people that bothers me the most is the tendency to want to shout down disagreement. At the convention Hillary delegates listened respectfully to Bernie and anyone who espoused his principles. But the Bernie people tried to shout down Hillary supporters, especially on the first day. Bernie hi\mself told his supporters that Hillary's people were respectful to him and others, and they should be equally polite. But many chose not to follow the advice. I find it sad and annoying that the far left has taken to the idea of shutting down the words of those they disagree with. You see it on college campuses, where speakers are disinvited after protests, or are interrupted with, again, empty slogans, or are subject to protests that try to keep listeners away.

It used to be that it was the far right that wanted to shut down discussion, such as with book banning and burning.  Even book banning has been taken over by the left, with "Huckleberry Finn" and other books being deemed unacceptable.  Many people see George Orwell's "1984" as a cautionary warning against right wing totalitarianism, but Orwell always saw the left as more likely to generate a totalitarian society. As a lifetime left leaner myself I was resistant to that, but as society evolves I can see wisdom in what he was saying.

As someone who would have been a "Bernie or bust" guy at one time, I see through them. I see the unwillingness to be tainted by compromise with the less-than-perfect, I see the warm glow of feeling superior, I recognize the value of a stable identity as a "crusader for truth" and an acolyte of a superior candidate. There is no point in giving advice to the true believer, but if any are open to conversation my advice would be to keep working for what you believe in, but factor in two important considerations that are currently being ignored:  1.  issues are complex, so open your mind to what others have to say; weigh and consider all sides;  2.  recognize reality, including the odds of a position being transformed into law, and the need for intiatives to be paid for. Boiled down to a phrase, it's this:  think, don't just spout empty slogans.

Finally, and I know how this sounds to a "Bernie or bust" person since I've been there, the potential for a replay of the 2000 election, where a few thousand true believers give us a Donald Trump presidency, scares the shit out of me.