A female co-worker once told me it was too bad I was gay because otherwise she’d like to go out with me.

A long time friend extolled the virtues of Rick Santorum as a potential president.

I’ve been told that it must be nice to not have to support a family because it gives me so much more disposable income. 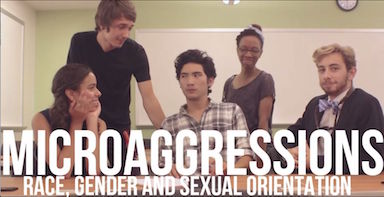 As a gay man I’ve had many other similar experiences of a sort that straight people don’t have. Those types of experiences have been described and decried in recent online articles and throughout much of the gay world as “microaggressions.” The term was coined by psychiatrist Chester M. Pierce in the 1970s, and is defined by Merriam-Webster as “a comment or action that is subtly and often unintentionally hostile or demeaning to a member of a minority or marginalized group.”

A lot of gay people are outraged and/or annoyed by what they interpret as microaggressions, and their numbers seem to be growing. I’ve also noticed that the bar for classifying something as a microaggression seems to be ever lowering.

I believe that this phenomenon is harmful to our mental health as individuals and to the health of our community as a whole. Being alive “dooms” people to annoyances and imperfections of many types. The world is bothersome in varied ways, and every human being in it is much less than perfect. To people who overreact to these annoyances the world seems a lot more antagonistic than it really is. Their well-being and self perceptions are seen and experienced as ever more threatened. Anger, resentment, depression, feeling like a victim - these are the rewards for buying into the microaggression meme.

To the broader society we look like whiny children seeking ways to highlight and enhance our victimhood. A persistent stereotype of gay people is that we are weak, and harping about microaggressions in the face of all the truly significant problems in life feeds right into that stereotype.

Many of the situations classed as microaggressions are incredibly minor. Others aren’t aggressions in any way, but are merely acknowledgements of our gay identity. And acknowledgement is not an aggression. For example, the woman who wanted to go out with me was COMPLIMENTING me. She was also acknowledging my sexuality, but a well-adjusted gay person has no problem with that.

Some so-called microaggressions are more significant, such as the reality that I have to keep coming out because people tend to assume I’m straight. But that’s inevitable and will always be so. All surveys show that the percentage of people who are predominantly gay is about 4-5%, and many of those people are not out at work. Of course the default subconscious assumption when meeting a new person who doesn’t exhibit stereotypical behavior will be that they are straight. There is no one to blame for that. It’s a bothersome aspect of being gay, but life is bothersome sometimes.

Let me tell you a story. A woman was born on a small farm in Wisconsin. When she was twelve years old she watched her sister drown in a nearby lake. She always felt responsible. Not long after, her father, likely unable to handle his grief, hung himself in the barn. Her other sister was diagnosed with severe mental illness as a teenager, and was institutionalized until her death. Her brother became an alcoholic.

After her father’s death the family had to leave the farm for a cramped apartment in a small town, where her mother cleaned houses to eke out a living for the family. In young adulthood the woman developed her own mental illnesses, and was hospitalized for them, undergoing a series of shock treatments. She married, but the marriage was not a happy one. She had another mental breakdown, and was hospitalized again. She fought phobias and anxieties throughout her life.

Less than a year after retiring her husband had a massive stroke that rendered him unable to talk, use his right arm or think clearly. The woman mended her relationship with him and became his primary caretaker for the last fifteen years of his life. A few years later her daughter developed severe OCD, and she became her daughter’s caretaker as well until she was able to once again live on her own. After her husband’s death she developed emphysema and was dependent on oxygen. She began a gradual decline into dementia. She fell and broke her hip, and died a month later.

The woman I am talking about was my mother, and everything I have said about her is true. It was only after her death that I fully comprehended the extent of what she coped with and lived through. One reason for that is that she never played the victim, and she never railed against God or fate or other people. She just got up every day (early!), put one foot in front of the other, and did what she had to do. One of her greatest legacies is that she taught her children to not sweat the small stuff, to never feel like a victim, and to fight through the inevitable difficulties of life without making them bigger than they were.

For most of human existence life has been difficult, dominated by wars, disease, death, deprivation of all kinds, hardscrabble efforts to provide for one’s family. For gay people it has been even more difficult. When I was born gay acts were illegal in most states, and homosexuality was officially classified as a mental illness. Few people dared come out, and marriage was a dream. In the 1980s and 1990s gay people either died or watched as friends died; entire communities were decimated.

And now here we are today in America, where life has apparently become so easy that we can see it as a challenge to our well-being when someone supports a presidential candidate we don’t like. Or when someone asks us for fashion advice because we’re gay. Or because some people stare if we hold our partner’s hand while walking down the street.

As someone who lived through the height of the AIDS crisis, as someone who grew up with almost no representation in any media, and as someone who witnessed much of my mother’s courageous journey through life, I have some blunt advice to people angered or offended by microaggressions: grow up and stop being a victim.