This piece will piss off a lot of people. (Dan Savage will certainly be removing me from his Christmas card list.) However, it begins in a comfortable and reassuring way.

I’ve been a progressive since I discovered politics when I was fifteen years old. Even before I realized I was gay I identified with the poor, the hurting, and the marginalized, and I wanted to use the tool of politics to make the world a better place for those people. I was raised in a sheltered, rural farming community, and so I didn’t fully realize I was gay until I was nineteen. I embraced my identity from that point, somehow never feeling the self doubt that so many of my generation did.

My gay card and my progressive card are rubber stamped every year. (Well, they have been until now!) So far, so good, but…. I also have an independent mind, and sometimes that puts me at odds with the mainstream of the progressive and queer communities. One example of that is my admiration for the Log Cabin Republicans. 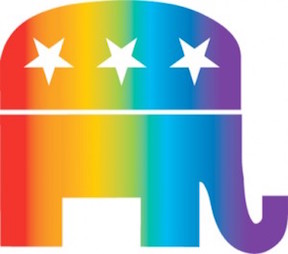 When the gay media talks about LCR it’s either with disdain, classifying them as traitors to the cause, or with puzzlement, approaching them as a strange, quaint group worthy of anthropological study. In a remarkably self-righteous and belligerent recent rant Dan Savage said that the group’s mission “goes beyond standard-issue self-hatred. It’s far darker and more disturbing. Get help.” On online forums the group is routinely and almost universally lambasted. They are like Jews for Hitler or blacks in the Ku Klux Klan.

I admire them because it takes guts to be out and highly visible in a political party that has generated so much hate and disrespect for gays over the years. And it takes guts to also face the hate and disrespect of their own community, the very people to whom those of us with more “acceptable” views turn for support and camaraderie. In a highly social world non-conformity takes courage, and these folks have it.

I also admire them because they think for themselves when developing their political worldviews. A lot of gay people are liberals simply because liberals have been more gay friendly, or because most of the other gay people they know are liberal. The uniformity of thought within our community troubles me. It’s as if there is a little black book of acceptable queer thought, and when any issue comes up we all consult the book and come out with the same approved opinions. I admire gay conservatives because they’ve thrown away their little black books and instead think for themselves.

For a lifelong progressive like me it’s tempting to think that progressive ideas represent the only valid way to make the world a better place. But that just isn’t true. Though I don’t agree with most of it, conservatism is a logical and well thought out philosophy, and has been adopted throughout our history by a wide range of intelligent and articulate people. I could take the conservative positions in a debate and defeat most of the liberals I know.

So what is a gay person to do if he examines the world around him and decides that small government is best, that lower taxes would help the economy, that a balanced budget is essential, that we need more emphasis on personal responsibility, that gun rights are important, that abortion is murder, etc? If my analysis of the world had made me a conservative I’d be a Republican and try to enlighten my party on the issues of gay rights and equality.

Gay people seem at a loss to understand how another gay person could be a member of a party that doesn’t support their basic rights. Here is Savage again: “What kind of faggot supports a politician who would do him harm? Oh, right: the same kind of faggot who would harm himself with drugs or alcohol or sex. The kind of gay men who don't like themselves or other gay people much.” What people don’t understand is that for some gays, gay-centric issues are important, but not the only issues they care deeply about.

I have to say a few words about the common comparison of the Log Cabin Republicans to Jews supporting Hitler. That is wildly over-the-top hyperbole. Do I really have to explain that there’s a difference between murdering millions of people in a quest to exterminate a race on the one hand, and opposing marriage rights on the other? Do I really have to point out that Republicans have been in control of the government several times, and gay people have not been rounded up, concentration camps have not been built, and mass murder has not ensued? Sheesh.

There are few things I value in life more than thinking for myself, especially when that thinking leads me to buck popular trends or the groupthink I too often encounter. For much of my life simply being an out and proud gay was a matter of resisting the majority opinion of society to come to my own conclusions about life and sexuality. It helped make me an independent thinker. I don’t agree with the political philosophy of the Log Cabin Republicans, but I respect and value their willingness to face ridicule from their fellow gays to follow their own path to what they believe.