The Wizard Of Oz Was More Gay Than I Realized

Watching the “Wizard Of Oz” was a tradition in our house throughout my childhood. But it was many years before I realized there were any gay connections with the movie. Even then, the only connection of which I was aware was the “friend of Dorothy” sobriquet. I always assumed that phrase originated simply because Judy Garland had become a gay icon. 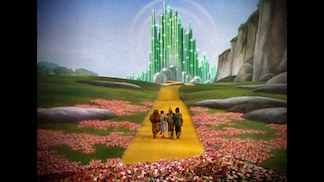 “Seasoned” gays will likely scoff at my lack of knowledge, but it turns out that the movie has gay resonances beyond what I had realized. For one, Dorothy’s new chosen “family” in Oz is similar to the non-biological families we form, and which protect and sustain us. And like many of our chosen families, hers was a collection of oddballs who felt out of step with the world around them.

Even today, with our “new millennial” possibilities, the goal of many gays - either overt or subconscious - is to escape from the constricted humdrum world to a magical, colorful world like Oz. Color has another resonance in the contrast of the black and white world of Kansas and the colorfully flamboyant world of Oz. The color contrast could also be seen as a metaphor for the move from a closeted world to an out and proud world. Then there is the subtext of escaping from fear. LIke Dorothy and her friends, gay people have historically spent much of their lives in fear - fear of rejection or abuse, fear of outing, fear of not measuring up to the world around them. The conquest of fear in the “Wizard Of Oz” feels liberating.

For me as a new millennialist, one of the most striking parallels relates to the theme that the Oz characters all discovered that they had always possessed what they so passionately sought; they simply needed the self esteem to realize it. There are too many gays today who don’t realize how much freedom, support and equality they already possess. They are too preoccupied with what is wrong to appreciate what is right and what has so dramatically changed. You can see that phenomenon when people come out, and then post online (or, in the case of celebrities, give interviews) about how much easier it was than they expected, or how much support they received.

A lot of gay people think the rainbow flag was inspired by the “Wizard Of Oz,” but it wasn’t. The flag was created by Gilbert Baker in 1978 after being commissioned by the San Francisco Gay and Lesbian Pride committee. Baker considered connections from religion, Native American communities, and the hippie movement of the 1960s. He felt that the rainbow’s multiple colors evoked diversity and beauty. As Baker said, “Our sexuality is all of the colors. We are all the genders, races and ages.” Ironically, he was born in Kansas, but the “Wizard Of Oz” was not his inspiration. (As an aside, Baker became friends with Harvey Milk, who rode in the San Francisco Pride parade under the new rainbow flag in 1978, a few months before his assassination.)

I was aware of none of the gay connections when I watched the movie as a soon-to-be-queer kid. All of them were well over my head at the time. But I do remember the magical sense of wonder and of longing, and the empathy I felt toward the four characters. Especially their status as "strangers in a strange land." I haven’t seen the movie in years, but I’ll have to watch it the next time it’s on, this time as the gay allegory I never recognized.