Are There Rachel Dolezals In the Gay Community?

The Rachel Dolezal story was one of the more intriguing, head-scratching stories of 2015. She was the head of the NAACP in Spokane, credited with reenergizing the chapter. For several years she had taught African history and culture courses at both a college and university. Over the previous few years she had reported several instances of anti-black discrimination or hate crimes against her.

However, Rachel Dolezal was exposed as a white woman who was pretending to be black. She had adopted an identity that didn’t reflect her ancestry, though it apparently reflected her self perception. She darkened her skin (though she claimed that she simply didn’t avoid the sun), she sported traditionally African-American hairstyles, and she talked about “we” and “us” when describing the black civil rights struggle. 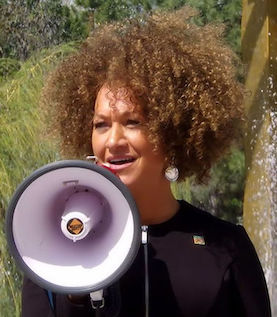 Hmmm….What’s going on here? Why would a member of the dominant, “privileged” race reject the benefits of that identity and instead adopt the identity of a race that to this day suffers discriminations, disadvantages and racist reactions of all kinds?

One of the most important social developments of the past fifty years (at least in the developed world) is the massive increase of emphasis on identity. For most of human history people’s lives have been dominated by the struggle for survival, or the struggle to make a hard life a bit easier. There was little time or psychological energy left over to think about identity in the terms we think about it today. Further, people lived in mostly homogenous communities. There was no internet to allow exposure to the vast array of people in the world. When most of the people to whom you are exposed are essentially the same, the concept of identity is not very important.

In contrast to the past, think about where we are today. Most people’s lives aren’t dominated by the quest for survival. And therefore many people have a big hole in their lives, a lack of purpose. Going to school and then getting a job seems to many like a boring and pointless life. Also, since we are now all interconnected via social media, we are aware of the many different groups and identities in the big wide world. For some, what’s more boring than being a straight white person in a world dominated by straight white people?

Consider Rachel Dolezal in that context. She was a run-of-the-mill white girl from a small town. Her parents provided for her needs, and her future seemed to be the same old story of college, job, retirement and death. Where is the purpose in that, some would ask, where is the significance of even being alive?

The only interesting aspect of young Rachel’s life was the adoption by her parents of four young black kids. Rachel was a smart girl (4.0 grade average in high school), and at some point she began to think about being black in a white world, and she became acquainted with the history of the civil rights struggle. I’m only speculating, of course, but it’s my guess that she began to see meaning and purpose in the fight for black equality. A conscious “quest” provides both excitement and purpose. Further, she began to see dignity and nobility in being black. As a blond haired white girl she just didn’t feel like anything special.

And so she gradually morphed into identifying as a black woman. The human mind being what it is, she eventually became convinced she really was black in every way that mattered, and so she could legitimately claim to be black. Her new identity filled that commonly experienced hole of meaning and purpose, and gave her a supportive community of other fighters for equality.

So back to my original question: could our gay community include people who really aren’t gay, but who identify as such for reasons similar to Rachel Dolezal’s? It’s a trickier question for gay identity, since being gay is a matter of feeling and emotion, while being black is a matter of ancestry. The former isn’t absolute, while the latter essentially is. For the purposes of this discussion let’s talk only about people who have attraction primarily to the opposite sex, but nonetheless claim a gay identity and attempt to inhabit that lifestyle.

My instinct is to answer the question by saying it’s unlikely. But then I realize that it was even more unlikely that a blond white girl from rural Montana would try to become black and convince the world of her adopted identity. There have been movies and TV shows where straight kids have pretended to be gay for popularity reasons. (Think about that one for awhile, my fellow gays who came of age before or during the AIDS crisis! Being gay as a route to popularity!)

It would certainly be easy to “pose” as gay. No one could disprove it by checking your ancestry or your history. Lots of gay people have slept with or had relations with people of the opposite sex, so a history of that wouldn’t mean much. The same incentives and “benefits” that Rachel Dolezal perceived in being black would apply to a straight person adopting a gay identity and becoming an activist: a meaningful purpose, an exciting quest, the camaraderie of a community, escape from the mundane. I’ve sometimes thought myself that I’m lucky to be gay because otherwise I’d be a straight, cisgender, white male. Boring! And increasingly hated or distrusted by all the identity groups out there.

Some observers expressed incredulity about Rachel’s situation because, they asked, who would want to be black in a dominant white world, exposing themselves to bigotry and discrimination? Similarly, who would want to falsely identify as gay in a world where gay people are “surrounded by hate,” as the gay media and gay leaders keep describing our world?

The answer may anger gay activists. That’s because the answer is that it isn’t as difficult to be gay in this society as a lot of people would have us believe. Yes, there is still discrimination and intolerance. But for the majority of people in most cities and among younger people gay people are readily and widely accepted. The overwhelming majority of large companies have gay protections written into their corporate policies. And it’s amazing how many people who are philosophically opposed to marriage equality have gay friends and don’t harbor ill will toward individuals. (Being raised in a rural Christian community, I know people like that.)

For many adults (the situation in a lot of schools is a different story), the benefits of community and the purpose and meaning inherent in a gay identity outweigh the negatives. For that reason it’s a realistic scenario to think that our community might have its own Rachel Dolezals.

As a postscript, Rachel Dolezal also identifies as bisexual. Considering her history I have to wonder if she is perhaps the answer to the question I raised in the title of this piece. If she is, then the question becomes: how many more are there? It doesn’t matter to me, and I personally have no problem with anyone claiming a gay or bisexual identity. The more the merrier, as my mother used to say.

The whole thing leaves me with a final question: isn’t human nature an endlessly fascinating subject?

Reply Manny Espinola
12:32 PM on November 25, 2017
Strictly speaking, we are all descended from Mitochondrial Eve, who was African.