Finally, An Intelligent Critique Of Out's Yiannopoulos Profile (Though It Still Doesn't Hold Up)

(This is the third part of what I think will end up being a four part series about the big "Out" kerfuffle.)

I’m STILL thinking about the Milo Yiannopoulos profile in “Out”. This is my third piece on the subject. My first article defended the profile (though certainly not the subject), and I was almost alone in my defense. Most of the attacks, via Twitter and digital media, struck me as vacuous and poorly thought out, a sort of mindlessly reflexive reaction born of an expectation that any queer media story about an “enemy” would have to be confrontational. The “Think Progress” open letter seemed particularly pointless, and never made a persuasive argument.

I have encountered a couple of thoughtful pieces that made me think, one of which was published by “thepridela.com” in Los Angeles and written by Karen Ocamb, a genuine journalist with a long history. The piece was called “Deconstructing Out Magazine’s Disingenuous Milo Yiannopoulos Profile,” and that’s exactly what she attempts to do at length. A quick first read comes across as fairly persuasive as she goes through several parts of the profile and suggests that a good journalist should have followed up in some way rather than let controversial statements sit there unchallenged. 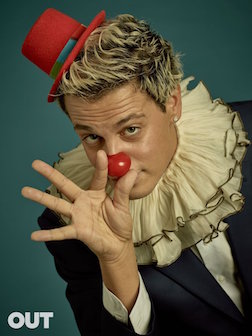 A closer read, however, reveals that the endeavor just doesn’t hold up to scrutiny. It goes off the rails at the beginning when she says: “I consider the entire spread to be one long advertisement for Donald Trump.” That’s just not a journalistically valid criticism. One of the central themes of Milo’s worldview is support of Trump, and so the piece touches on that, but only briefly. Ocamb appears to believe that just because of that support the entire profile becomes an “advertisement,” which just isn’t logical.

Ocamb then proceeds to pull out some of what she considers the most egregious of Milo’s comments, and chastises writer Chadwick Moore for not challenging or following up on those comments. The problem with that line of attack is twofold. First, “Out” made the journalistically valid decision to not do an advocacy-based, antagonistic interview. Rather, the subject was largely allowed to speak for himself, with pushback provided by other observers, like Shaun King. That is how most profiles in journalism are handled. Readers are trusted to have some level of understanding and critical thinking skills, and are allowed to make up their own minds.

For example, Ocamb quotes Milo’s comments about how he wears $1000 basketball shoes “because the guys I want to fuck know what they are but can’t afford them.” She says Moore should have followed up by suggesting to Milo that his comment was “dehumanizing.” Seriously? Doesn’t that comment stand on its own, and aren’t we as readers smart enough to know what we think about it?

The rest of the piece is a litany of followups and criticisms that Ocamb feels Moore negligently avoided. The thing is, had he followed up on all of them the profile would have been twice as long, and we likely wouldn’t have learned much more. Think about it. If Moore had suggested that the comment about the shoes was dehumanizing Milo would have made a flippant remark that would have accomplished nothing. I really do think the critics don’t trust the readers to interpret Milo’s comments on their own. I also think a part of the reaction is that the critics feel threatened by the comments, and feel a need to have their sensibilities assuaged by Moore overtly stating the objections they feel. In addition, I think they feel that to some degree the comments are being validated when they are not specifically called out and disputed.

Consider the comments I consider to be the most offensive, those about “trannies” and how hilarious they are. The comments stand on their own, and we don’t need Moore’s disapproval to help us decide what we feel about them.

I note that Ocamb talks at length about the one significant flaw I identified in the profile: the lack of clarity about Milo’s racial and supposed white supremacist views, and about how the truly scary elements of the far right wing are congregating under Milo’s alt-right banner. That’s one reason why I thought her critique was intelligent! Following up on that subject would have added genuinely important information, and would not have been simply an opportunity to express disagreement.

In the end Ocamb makes the really big mistake that virtually all critics have made. She takes Milo way too seriously, and ascribes to him substance and significance he just doesn’t have. He’s a troll who is essentially playing a role where he skims the surface of issues and makes outrageous comments with the intent of provoking reaction. He admits as much in the profile: “I’m more of a nuanced character than people realize because I play an asshole in my columns,” he says. He plays the same asshole in all aspects of his public persona. He wants attention, and he gets it in spades from easily outraged people in LGBT and progressive circles. I’ve never taken him seriously, and so I see his outrageous comments for the provocative theater they are.

He excites his alt-right base, all of whom already agree with him. And he repels the left wing and LGBT communities, none of whom will be converted by exposure to him. The middle is blithely unaware of him, and if exposed to him would not be persuaded because what Milo says is so obviously over the top. In other words he has little power beyond the power to provoke, to excite the already converted, and to make a big noise with no real impact.

I’m still amazed that so many critics have seen the “Out” profile as “fawning,” “glamorizing,” etc. Milo not only essentially hangs himself with his own words, but he is subtly revealed by Chadwick Moore as a superficial product of modern social media, someone who would rather play the part of a supervillain than have an intellectually substantive impact on the political and cultural discourse. He is revealed to be, to a large degree, a clown. Not an evil, dangerous clown like Donald Trump, who could do real harm. But a prankster, a troll, a bully, almost a fictional character.