We Progressives Are Kicking Ourselves In the Teeth

I’ve considered myself a progressive all my life. That is based on the philosophy and the political and social viewpoints that have animated my understanding of the world around me. I think for myself, so I’m not simply parroting the demands of the “Little Black Book Of Proper Progressive Thought.” In a few ways I diverge from the little black book, but overall my outlook has clearly been progressive.

Recently, however, I’ve begun to wonder whether I’m still allowed to call myself a progressive. So many of the self-described progressives out there seem to define the term not by positions on issues but by the REACTIONS they have to people they don’t agree with, and by the methodologies by which they want to engage their “enemies.” Further, the progressive community continues to shrink the universe of what it sees as acceptable behavior and expression, becoming increasingly sensitive to what it interprets as affronts and offenses of all kinds.

I was thinking of this earlier this year while reading “The Advocate” online. An overwhelming number of stories were simple rehashes of the same story: Donald Trump is evil and we hate him. Every day a couple of new articles would appear, and they all said essentially the same thing, while adding no new insights to the narrative. I posted a comment on one article that had seemed unusually pointless and repetitive. I pointed out that I was a lifelong progressive, but that there was more to discuss in the political and LGBTQ worlds than how much we hate Donald Trump. Someone responded to my comment by saying that with that attitude I clearly wasn’t a progressive.

I was thinking of all this again following the recent Oscars telecast, when multiple articles online chided or lambasted host Jimmy Kimmel for his “racist” or “casually racist” comments during the show. After Mahershala Ali’s win for Best Supporting Actor, Kimmel referenced Ali’s newborn daughter, and said that with a name like Mahershala he couldn’t name his daughter Amy. Later, during the tour bus skit, Kimmel asked the audience to yell out “Mahershala!” rather than “surprise!” when the tourists entered. 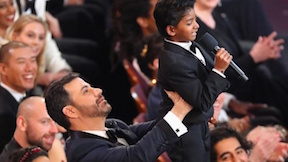 Commentators interpreted the jokes as “name-shaming,” or relegating a black man to “the other,” or “invalidating” him, or telling him that because of his name he “didn’t fit” in American society.

The problem is, none of those contentions are valid. Kimmel was in no way saying there is anything wrong with Ali’s first name. Rather, he was simply making a light-hearted joke about it being unusually long and difficult to pronounce. And guess what? It’s unusually long and difficult to pronounce. But there is nothing at all wrong with it, and Kimmel was not saying that there is any reason for Ali to feel anything but pride about it. Being a celebrity with an unusual name is a surefire way to have jokes made about the name. Ask Uma Thurman or Arnold Schwarzenegger. When I was in school a lot of jokes were made about my last name. Among other things I was called “Rock” and “Rockhead.” The intent was simply to be funny, not to be disparaging.

In the same way Kimmel was not “invalidating” Ali, or saying he somehow doesn’t fit in American society because his name was “different.” At our best we celebrate differences. We don’t pretend those differences don’t exist. In fact, it’s often our differences that make us stand out, that give us visibility, that provide us with an identity that allows us to feel MORE pride, rather than less.

The claim that the jokes relegated Ali to being “the other” is especially specious. To be “the other” is to be seen as something alien or scary or so strange as to not be a part of the mainstream world. Think about it. Do you really think that Kimmel was saying that this established actor, this new Oscar winner, this man who had recently appeared on his talk show, is someone to be kept at arm’s length, someone who should be shunted aside as not one of us, someone strange and alien? All because his name is a bit unusual and hard to pronounce? I certainly hope, for your sake, that you said no.

Here’s an example from my own life as a gay man. When I have come out to groups of people - for example, at work, or to my fantasy baseball league - those people tend to be initially reticent about referring to my gayness. It’s as if they’re embarrassed by the subject or uncomfortable with how I am different. But eventually they loosen up. I know I’ve really “made it” with them when they are comfortable enough to start joking about me being gay.

The key is the attitude. Kimmel - and my friends - do any joking in an inclusive, light-hearted, even affectionate manner. Jokes only become a problem if they’re mean spirited, if they try to diminish a person. No one with a functional brain could interpret Kimmel’s jokes as mean spirited.

Even more absurd was the criticism directed at Kimmel for raising 8-year-old “Lion” star Sunny Pawar over his head in a recreation of the iconic “Lion King” scene. Said “Teen Vogue” editor Elaine Welteroth: "He would NOT have held up a little white kid like Simba and played the song from Lion King — nope, not even for a film called Lion.” Jessica Prois added this helpful bit on the “Huffington Post”: “the image of Kimmel, a white host, holding up a brown child who doesn’t speak English as a prop in a skit with African-inspired music playing has racial undertones that are impossible to ignore.”

Hmmm….Sunny Pawar was in a movie named “Lion,” and so recreating a scene with a young adolescent in “Lion King” is logical. “Lion King” was about lions and other animals, not people. Most of the voice actors in the movie were white, and the music was written by Elton John and Tim Rice. When you peel back those layers you are left with the assertion that it was racist simply because Kimmel - the one doing the lifting - is white, while Pawar - the one being “patronizingly” lifted - is brown.

The left seems intent on eradicating our common humanity in deference to a stringent separation into racial and ethnic groups, where all actions and comments and social developments must be interpreted on the basis of the primacy of that separation. In reality “race” is a social construct that we impose upon the universality of humanity. Our genetic differences are miniscule, but we act as though there are gulfs between us. The “Lion King” transcends race or ethnicity. Jimmy Kimmel was a middle-aged human being lifting up a young human being in reference to a movie with universal themes. To see racism in that is both sad and unnecessarily polarizing.

One author of a critical article detailed how awful and racist were Kimmel’s transgressions, and then added, hilariously, “the internet agreed.” By which she meant that multiple tweets had been sent lamenting Kimmel’s supposed racist jokes and actions. She printed four of those tweets as proof of the internet’s “agreement” with her stance. This is absurd beyond words. Twitter does not represent “the internet,” and selected tweets from a few of the “little black book” devotees do not represent Twitter. Interestingly, multiple stories printed the same set of tweets. I’m reminded of comment section wars, where one person will claim his position is correct because his comment received ten up votes while his opponent’s comment only received four. This sort of thinking is where the most egregious examples of confirmation bias and “living in the bubble” come from.

I realize that to a segment of my progressive community this piece will make me sound as though I don’t “get it,” that I haven’t thought about things deeply enough to understand. Or haven’t had the experiences as a marginalized person of color that would allow me to understand. However, I think it’s the exact opposite. Kimmel’s critics are the ones who have not thought deeply about this issue. They are going with Pavlovian reactions engendered by the evolving progressive world of separation and super-sensitivity and victimhood. If you actually think through these allegations of racism the underlying logic quickly falls apart for anyone having an open mind.

So, to return to my title, how are we progressives kicking ourselves in the teeth? First, we look like reactionary fools to middle-of-the-road people and even to many of our fellow liberals. The Prois piece in “Huffington Post” generated a large number of comments from people identifying as liberals, but who thought Prois had gone way too far, seeing things that simply weren’t there. So many progressives are so firmly entrenched in their bubble that they don’t see the degree to which we are seen as goofy and increasingly dangerous by a growing number of our fellow citizens. Those citizens are literally afraid of this emerging progressive mentality that they label as “politically correct” or as being pushed by “social justice warriors,” to use the pejorative phrase increasingly and tauntingly applied by conservatives. The problem is, it’s not just conservatives who have a problem with our oversensitivity and reduction of society to competing identity groups. Based on my conversations with people a large number voted for Trump because of this reaction. If this trend continues I have more fear than hope when it comes to future elections.

Second, we have created a world where we literally encourage the vulnerable and the marginalized to feel more threatened, more affronted, and more victimized than is warranted. If we see racism and homophobia and xenophobia everywhere, then the world is a much scarier and unfriendly place. Differences are highlighted, universality is ignored, jokes are always insults, marginalization is assumed and expected. A cute re-creation of a famous movie scene becomes another example of racism by rich white men. Suspicion eats at our souls, division and distrust dominate our worldviews, unity and common purpose do not exist.

So this is the world we are currently living in. But imagine another world, where we understand good-natured humor for what it is. Where we are confident enough that we can laugh at ourselves. Where joshing doesn’t indicate that we are the “other,” but instead is indicative of inclusion - an inclusion based not on pretending differences don’t exist, but on acknowledging those differences as a vital and interesting part of life. THAT is the progressive world in which I want to live.