Wait, what??? Sexual preference??? What am I thinking? I can’t use that term. It indicates that sexuality is a choice, as opposed to an innate, unchangeable orientation.

Over the years we’ve come to agree that “sexual preference” is a term used by the ignorant or the willfully homophobic. However, as the march of cultural evolution continues, making gay people ever more mainstream and accepted, and as my own outlooks mature, I have come to believe that we should abandon our antipathy to that phrase. 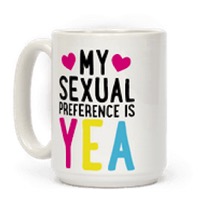 Get the mug at:  lookhuman.com

Actually, I would argue that we should overtly “reclaim” the phrase, much as we have reclaimed the word “queer.” More about that in a bit, but let’s start with why I think we should stop getting bent out of shape when people now use the phrase. First, and most importantly, it is not actually incorrect. I, like other gay men, could choose to have sex with women, even though I’m only attracted to men. Gay men have been doing that throughout history, marrying and having children to hide from and fit in with an intolerant world. So even though I’m gay and could have sex with women, I PREFER to have sex with men. That is my sexual preference.

In today’s ever more enlightened world we want to affirm gender fluidity and reject the traditional binary construct. But at the same time many of us are resistant to the concept of fluidity in sexuality. I have never had sex with a woman, but many of the people who identify as gay HAVE had sex with opposite-sex partners. Contexts.org recently did a study based on data from the 2002, 2006-2010, and 2011-2013 National Survey of Family Growth. The surveys included men and women 15 to 44 years of age. They showed that 39% of men identifying as gay have had a female sexual partner at some point in their lives, while 59% of women identifying as lesbian have had a male sexual partner. Despite those experiences their self identity indicates that they PREFER to have sex with same-sex partners.

The bottom line is that in the fluid, non-binary world in which we live, “sexual preference” is a valid, legitimate concept.

The second reason to stop being antagonistic toward the use of the phrase is that it is rare for someone to use it with the intent of indicating a belief that orientation is a choice. Most people use it innocently as a commonly heard substitute for orientation, unaware that we in the gay community interpret it differently, and that many of us take offense. We who are gay focus a lot of energy and attention on the subject of sexuality, but, believe it or not, straight people have other things on which to focus. If they don’t mean to claim that our orientation is a choice it seems rather pointless to take offense.

In simple terms we should lighten up about language, not only about the phrase “sexual preference,” but in general. It’s a sign of maturation, a sign of our awareness that we are no longer the misunderstood outcasts we used to be. For many of us the insecurity of the past has been replaced by a confidence born of our own strength and the burgeoning acceptance that surrounds us. A straight person referring to “sexual preference?” Nope, that’s not going to bother me.

As I stated at the beginning of this piece, I’d actually like to reclaim the phrase. There’s something about objecting to it that has always made me uncomfortable. We’re sort of saying “you have to accept me because I was born with this unfortunate condition and there’s nothing I can do about it; it’s not a choice.” Because who would choose that condition, after all, as awful as it is? That’s the underlying context to some degree. But I have NEVER felt that there’s anything unfortunate or wrong about being gay. Whether I chose it or not, whether I can have sex with anyone but prefer men, who cares?

Yes, my sexual preference is that I like men.