Re-Evaluating the Supposed Homophobia Of "Silence Of the Lambs"

"Silence Of the Lambs" director Jonathan Demme died recently, which generated multiple stories about his most famous movie. It was known for winning five Academy Awards, including all five of the major categories. It was known for its riveting performances by Anthony Hopkins and Jodie Foster. And it was known for generating a huge backlash from the LGBT community.  GLAAD issued a strong denunciation. Gay people, led by Queer Nation and ACT-UP, protested and picketed for a year leading up to Oscar night. Larry Kramer called the film "one of the most virulently and insidiously homophobic films ever made."

Interestingly, the outlook of many gay people toward the movie has mellowed over the years, with most - though not all - of today's objections based on the perception of transphobia. Demme's death and the resultant articles got me thinking about the movie again, and about the legitimacy or lack thereof of the outrage and criticism.

I saw the movie in a theater back in 1991. I was stunned by it (in a good way). Hannibal Lecter, Clarice Starling and Buffalo Bill (Jame Gumb) were extraordinarily compelling characters. I did not perceive the movie as homophobic, and was not immediately aware that others in the community saw it that way. In those days, before the ubiquity of the internet, people were allowed to reflect and make up their own minds before being inundated by the reactions and group think of the wider world. 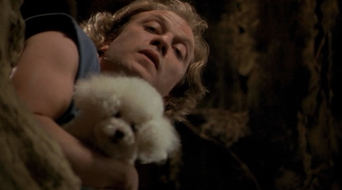 So why did so many gay people, especially the activists, react so negatively and vehemently. Serial killer Buffalo Bill was perceived as gay, and this was a time when few gay people appeared in movies or on TV shows, and those that did were disproportionately presented as limp wristed stereotypes, or criminals, or disturbed, or unhappy victims of some kind. And here came a character who was perceived as embodying all of those characteristics in one demented, murdering soul. The gay community desperately needed and wanted mature and positive representation. Was that too much to ask? As the most inspired protest chant went, "We're here; we're queer; put us in your movie."  I love that!

I didn't have the same reaction because I didn't interpret Buffalo Bill as a gay character. Protesters pointed to a reference to a previous male lover (who Bill had killed). Then there were Bill's characteristics. As a GLAAD leader said:  "The killer in the movie is a walking, talking gay stereotype. He has a poodle named Precious, he sews, he wears a nipple ring, he has an affected feminine voice, and he cross-dresses. He completely promotes homophobia.” The problem is that Bill considered himself to be transsexual, not gay, and all of those characteristics fit with that self-perception. The male lover would fit into that scenario as well. The whole point of the character was that he hated what he was, and wanted to transform himself into something else:  a woman. Hence his obsession with butterflies and their metamorphosis from one thing (chrysalis) to another (butterfly).

I did not see a gay character. Rather, I saw a psychopath, someone whose entire being was warped by his past, someone who was so outside the realm of decency and "humanity" that every action and attribute were beyond conventional interpretation. Even in 1991 I was aware of fluidity and context in relation to sexuality. Bill may have had one or more male lovers, but for me that did not make him gay in any meaningful sense. Hannibal Lecter, his psychiatrist, explained it as a part of Bill's desire to morph into something willfully "out there." At that time being gay was certainly "out there." Further, having a male lover would fit into his desire to become a woman. We are always reminding people that there is a big difference between gender identity and sexual orientation.

After the controversy erupted Demme took pains to make clear that the character was not meant to be seen as gay. He said at the time:  "We knew it was tremendously important to not have Gumb misinterpreted by the audience as being homosexual. That would be a complete betrayal of the themes of the movie. And a disservice to gay people.” Ted Levine, the actor who portrayed Bill, has stated that he never saw the character as gay, and had no intention of playing him that way.

For all of those reasons "Silence Of the Lambs" and Buffalo Bill did not offend me, or make me feel demeaned.

For neither the first nor last time in my life I was on a different wavelength than the activist wing of the community. In the first draft of this piece I stated that I found it surprising that gay activists would interpret Buffalo Bill as gay. But the more I think about it the more I understand it. The warriors of Queer Nation and ACT-UP were in the midst of their boisterous and increasingly successful fight against AIDS apathy and various other forms of homophobia. Full of anger and rage from the devastation of the disease, energized by their increased visibility and prominence, they were not in a place to be able to see the complexity and nuances in a character like Buffalo Bill. Overlooking the transsexual dynamic, they saw a man who had had sex with a man, and therefore they saw a reprehensible representation of the community they were defending.

I understand that reaction. There was another important factor, however, that isn't nearly as obvious, but was just as important:  insecurity. The activists of 1991 were raised in an environment of social disapproval that young gay people today can't really understand. There were few positive gay characters in the movies or on television, and almost no gay celebrities. Young gays were enveloped in a sense of isolation as their identities emerged, and then they lived through the horror of AIDS. Insecurity was almost inevitable.

Even in today's much more open and enlightened world insecurity is a common attribute of the gay psyche. While writing this piece I watched the fascinating documentary "Do I Sound Gay." At one point director David Thorpe was talking to two friends about his "gay voice". One friend had perceived David to think his voice was "bad." "Do you think that yourself?" asked the other friend.  The casual reply floored me:  "Well, you know, I have a sort of generic self-loathing that is created around my gayness." I think that sort of negativity is a larger part of the gay psyche even today than we want to admit.  It was certainly even more prominent in 1991, and activists were not immune, despite their bravado and combativeness. The combination of insecurity, rage, and a lifetime of slights and marginalization made it easy and perhaps inevitable that a character like Buffalo Bill, in one of the most seen movies of the year, would be seen as a reprehensible outrage worthy of furious demonstrations.

I've always had a love/hate relationship with "activists," and the reaction to "Silence Of the Lambs" is an example of why. While activists are vital in raising awareness, pushing for change, and making it clear that we will stand up for ourselves, a corollary is that being an activist to some degree removes the ability to think and reason. At least about the issues at the core of the activism. That will offend a lot of people, but think about it for a moment. All that matters is pushing the agenda. No one wanted to hear Demme or anyone else discuss the complexity of the character, or how neither Demme nor Thomas Harris, the author of the book, intended for Buffalo Bill to be interpreted as a gay man.

I want to say a few words about the transsexual angle. When I saw the movie in 1991 the issue of transgenderism was much less understood and prominent than it is today, and I didn't give it enough thought. Today I better understand how the movie could be seen as transphobic. In fact, I see it that way myself. The crux of the movie is that Bill wants to be a woman, and in pursuit of that goal he becomes a murderer. Hannibal Lecter says that Bill isn't a "real" transsexual, but the reasoning isn't persuasive. Being declined for sex confirmation surgery is far from definitive. And the premise that Bill wants to be a woman simply because he hates his current identity and wants to be something else is problematic.

Some people have referred to the movie as an outdated relic of an earlier time in regard to the LGBT issues. To some degree that is true regarding the transphobia aspects, but I actually think the movie is AHEAD of its time. And today is not yet that time. We are still too sensitive and too insecure and too reactive for what I would consider a "correct" understanding of the movie. Consider a world where gay people and trans people are fully accepted and secure in their identities, and where fluidity of identity is understood. In that world a serial killer formed and deformed by an abusive past could have a male lover without it being any comment on the gay community. He could pathologically want to change himself into a woman without it being seen as a representation of the trans community. Positive gay and trans characters would not be rare in that world, and so a negative character would not be a threat.

As odd as it may sound, that's essentially how I interpreted the movie, even in 1991. Based on people to whom I've talked, and comments I have read, I am not alone. There is very little black and white in the world; most everything is gray. "Silence Of the Lambs" exists in that gray world.