Gay people in movies or on TV are no longer either unusual or controversial. Gay kids, on the other hand….

One of the last places you’d expect to see an unequivocally gay middle school kid would be the Disney Channel. Historically squeaky clean, aware that it’s viewership demographic includes very young kids, it has produced a multitude of kid-centric sitcoms that try to be ethnically diverse but rarely go anywhere remotely controversial. Young kids mature at different rates, and parents want to retain control over how and when they learn about the more mature aspects of the human experience.

But here comes “Andi Mack,” a new show that premiered in April, with its twelve episode first season running through June 23 (and with reruns being regularly shown since then). It is breaking all sorts of new ground for Disney. Andi Mack is a mixed race (Asian and Caucasian) middle schooler who discovered in the first episode that who she thought was her older sister was actually her mother, while the woman who raised her was her grandmother. That was obviously a huge shock that generated all sorts of family drama.

There had been rumors that the show would include a character who was questioning his or her sexuality, and would turn out to be gay. Those are still officially rumors and speculation, but there is no doubt in my mind that Cyrus Goodman, one of Andi’s two best friends, will be the gay character. So much of what he experienced in the first season resonates with my own experience as a young gay guy who at that age hadn’t yet realized he was gay. 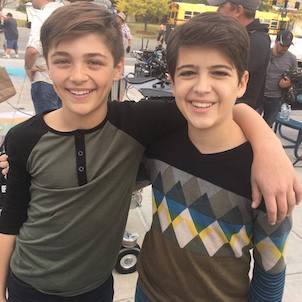 Andi has a crush on Jonah Beck, the quintessential “big man on campus,” who, unfortunately for her, has a high school freshman girlfriend named Amber. Unlike the stereotype in these situations, Jonah is not an elitist bully, but is actually a nice, considerate guy, though a bit self-absorbed. The groundbreaking situation here is that Cyrus ALSO has a crush on Jonah. However, neither he nor the other characters realize it. Cyrus sees himself as simply wanting to be friends with the coolest kid in school, a goal made more desirable by the fact that he hasn’t had many guy friends in his short life.

Perhaps that is all it is, you might suggest. Shy, insecure boys often act much like Cyrus, and their desire to be friends with one of the cool boys can mimic the desires of gay boys. However, Cyrus in many ways embodies several gay stereotypes, from how he dresses and his concern about clothes, to a sort of “prissy” personality, to mannerisms many would classify as feminine. Further, I see an interest in Jonah that clearly goes over the line into romantic pining.

There was one situation in the season finale that made it clear that Cyrus is gay, and that the show fully intends to pursue that situation. Jonah was breaking up with Amber on a sidewalk, immediately after Andi and Cyrus had left and were walking away. Amber angrily said the breakup was because of Andi. Jonah denied it, since he had become convinced that Andi no longer was interested in him as a potential boyfriend. “Watch,” Amber said, referring to Andi, “if she turns around to look it means she likes you as more than a friend.” Jonah watched for awhile, and then turned to go. At that moment Andi turned around and looked back longingly at Jonah. She turned around again, and then Cyrus turned around, staring at Jonah with a look that brought back my own youthful longings. Said a young online commenter: “Cyrus looks so hurt I’m crying.”

Oh man, do I relate to all of that! I had a series of intense infatuations, both painful and exciting, before I fully realized in my late teens that I was gay. Like Cyrus, I just thought those feelings reflected my struggle to have the “normal” guy friendships that my shyness and nerdiness made difficult. Like Cyrus, I had to watch my “crushes” interact with girlfriends and more typical guys, while I suffered in a pining combination of pain and desire. You would think that intensity would have told me something (and would tell Cyrus something), but at that age emotions and knowledge and perceptions are so turbulent and new that rational thought and contemplation rarely enter the scene.

Cyrus as gay has all sorts of fascinating components and potential controversies. The first and most important, of course, is the reaction of parents. I have seen rather strenuous objections online to the main plot twist of Andi discovering her mother’s identity, and then later being introduced to her father. “It’s too soon for kids to have to think about those things,” they say. If and when Cyrus “officially” becomes gay the objections will be much more fierce. And those objections emphatically are not just from parents who have issues with the concept of homosexuality. Many parents who are totally fine with gay people simply don’t want their young kids exposed to something like that via television. They want to make those decisions for themselves. My prediction is that there will be some pushback, and then a threat or reality of a boycott from some group. In today’s ever more enlightened world, however, the objections will quickly fizzle, and life will go on.

A more fascinating issue is Cyrus’ stereotypical traits. A lot of people online are bothered by that, and are hoping that someone other than he turn out to be the rumored gay character. However, I see two sides to that coin. The traditional view, probably shared by most gay people, is that propagating those stereotypes is a disservice to the community. Haven’t we had a long enough history of gay people being seen in those terms? Gay people come in all sizes, types and personalities, and another stereotypical character would not be helpful, especially a character in a show produced for kids.

Gay kids (and adults) who conform to the stereotypes to some degree are very common. Just yesterday my checkout clerk at Target was a young guy who could have been created by a homophobic sitcom writer in the pre-Stonewall era. A majority of the gay people I’ve known have possessed some aspect of the stereotypes. I’ve reached the point where I embrace those stereotypes because they are real, and they reflect real people. The key is to reflect those traits in a sympathetic rather than a ridiculing way. So far, “Andi Mack” is doing that with the character of Cyrus.

Luke and Noah from “As the World Turns” instigated my desire to write about the gay world. I still miss the heady days when discussions of “Nuke” dominated the late, lamented “AfterElton” website (where I was first published). Luke and Noah were celebrated partly because they were so non-stereotypical. They were exactly like straight guys, except they slept with men! Hallelujah! That was part of an entertainment world change that made most gay characters indistinguishable from straight characters.

I eventually came to see that development as a two-edged sword. It unwittingly served to demean and marginalize the feminine gays to some degree, and to make stereotypical attributes seem negative. I recall spirited debates on “AfterElton” after “Glee” introduced Kurt Hummel. Many commenters were enraged that we were back to a stereotypical gay. At least eventual boyfriend Blaine was more like a straight guy.

If the stereotypical Cyrus is the gay person on “Andi Mack” (and I’ll be stunned if he is not), then young viewers will have their likely first exposure to a gay person be informed by the stereotypes. However, imagine the benefit and support and validation that it would give to young gay kids who are a bit feminine, who do possess some of the stereotypical traits. Further, since the show will clearly tell Cyrus’ story in a positive, sympathetic way, it will help straight viewers to interact with their more stereotypical peers (or older relatives and friends) with acceptance and understanding.

The show appears to be setting up a romantic triangle with both Cyrus and Andi interested in Jonah. Will Jonah turn out to be bi, or will he be straight, dooming poor Cyrus to unrequited love? Online speculators are already decrying the unfairness of portraying a gay character in love with a guy who doesn’t return his romantic feelings.

The thing is, in the real world Cyrus would almost certainly be fated to be hurt and disappointed, since Jonah will most likely be straight. That is true both because the odds of that scenario are overwhelming, and because Jonah has been portrayed as having genuine interest in girls. In my own case, not one of the many guys with whom I became infatuated turned out to be gay. As painful as it can be - and for me it was exquisitely painful - that’s the reality that a lot of young gay people will experience.

That will be a difficult road to travel for a TV show aimed at kids. Just having a gay character at that age, who is experiencing life and love without realizing he’s gay, is tricky enough. But then handling all aspects of that in a way that’s realistic while still being hopeful and affirming will require a deft touch.

The final issue I want to discuss is how long the show will keep Cyrus and his friends in the dark about his true nature. As I said earlier, throughout my youth I had infatuations without realizing I was gay. I recall telling my best friend in high school that I had gay “tendencies,” but I still thought I would some day marry a woman and raise a family. Of course, that was a different era, with much less exposure to gay people and gay culture. I had no Kurt Hummel, no “Will and Grace,” no explosion of joy with the legalization of marriage, etc.

Nonetheless, it is not at all strange that Cyrus and his friends haven’t even considered the gay angle yet. But at some point in the near future that consideration will become inevitable. Who will realize it first - Cyrus, or his friends, or the subject of his romantic feelings? How will those realizations change his world and his relationships? It will be a tricky path for the show to walk.

The second season of “Andi Mack” begins this fall. I normally don’t watch kids shows (and I’ve only skimmed the first season of this one), but I’m intrigued by how this will develop. The evolution of a gay kid is usually a bit of a rollercoaster, and Cyrus Goodman may portray that evolution better than any previous character has.