Every once in awhile something happens that changes society forever. The 9-11 attacks represent one such example. The Supreme Court decision legalizing gay marriage is another. The avalanche of sexual harassment claims following the Harvey Weinstein accusations is the most recent example. American society is significantly different today than it was just two months ago.

This change primarily affects the relationship between men and women, but in the wake of the accusations against Kevin Spacey and George Takei it has impacted the gay world as well. The reaction to Spacey in the gay world has followed a course that seems obvious to me. It’s easy to disparage him, for three reasons. First, the initial complaint was made by a man, actor Anthony Rapp, who was just fourteen when Spacey assaulted him. Second, many additional accusers have come forward, including those alleging recent transgressions. Third, it’s easy for the gay community to attack him because many have resented the fact that he did not come out until now, and therefore he’s never been “one of us.”

The George Takei case is very different. He is a revered figure in our community, coming across as an overtly nice guy whose attitudes and priorities have always been exemplary. And he’s been exemplary while maintaining a great, occasionally ribald, sense of humor. An “icon” was how many recent stories described him. 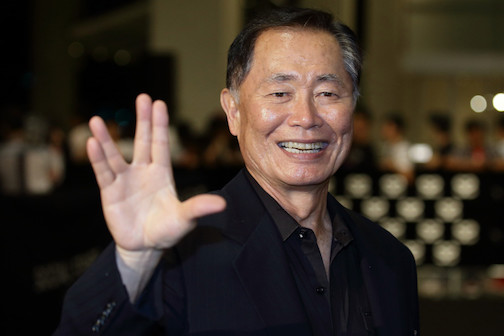 When former model Scott Brunton recently accused him of a sexual assault in 1981 when Brunton was 23 and Takei was 43 many of us were dumbfounded, and weren’t sure how to react. I remember thinking that George was about the last guy I would have expected to be the subject of one of these accusations. I wondered if it was true, and then if, as is usually the case, other accusers would step forward with their own stories. As of yet none have, and George issued a denial that included this phrase: “The events he describes back in the 1980s simply did not occur.” The denial is in line with those issued by many of the recently accused.

One result of the current societal change is that we’ve been admonished and are increasingly inclined to believe accusers. That seems generally appropriate since most cases end up validated. Many liberals and queer people seemed to think that Takei deserved an exception, however. I checked out many liberal sites, e.g., “Salon,” and “HuffPost,” and many commenters said they were giving George the benefit of the doubt, or that they flat out believed his denial. The reasoning, in many cases, was that they couldn’t believe an icon of our community would do the things that Brunton alleged.

As someone who has been both gay and a huge “Star Trek” fan since I was a kid I wanted to believe Takei. But I also pride myself in rational analysis, one result of which is looking past my biases to see things as they really are. When I do that I am inclined to believe Scott Brunton. The first reason is the simple truth that most accusations turn out to be valid, absent of monetary claims or desire for revenge. Brunton is seeking no money, and only wants an apology. His motivation appears to be disappointment at Takei’s disapproval of other people accused of sexual assault, and Takei’s apparent hypocrisy.

One of the reasons to believe an accuser is if he or she told others about the assault at the time. Brunton told several friends about Takei’s alleged assault, and has been telling the story for years, with no prior interest in going public. Cases like that almost always turn out to be legitimate.

Even more compelling is a discussion George had with Howard Stern on the latter’s radio show. They had been talking about the Weinstein case, and below is a transcript of what followed.

Stern: “Did you ever grab anyone by the cock against their will?” Takei remained silent.

Stern: “Uh oh. You’ve never sexually harassed anyone, have you?”

Stern: “Do we need to call the police?!? What are you saying, George? You’ve never held a job over someone if they didn’t touch your cock.”

Co-host Robin Quivers: “But you didn’t do this grabbing at work.”

Stern: “So what do you mean? You mean some guy who was hesitating to have sex with you and then you gave him a gentle squeeze on the balls or something?”

Takei: “More than a gentle…But it didn’t involve power over the other.”

George certainly seems to be talking about a situation amazingly similar to what Brunton described. He has since claimed the whole thing was a “skit,” and he said this: "For decades, I have played the part of a 'naughty gay grandpa' when I visit Howard’s show, a caricature I now regret." When I put all the facts together I’m left believing that Brunton’s story is likely true.

And what if it is true? Well, either way it raises a couple of thorny issues that specifically impact the gay world.

The most important question is this: is there a difference in the concept of sexual “assault” or impropriety between the gay and straight worlds? I have seen no one of prominence, no one with a significant voice, make any such claim. I don’t know if I could be considered to have a voice, but I am hereby making that claim in a qualified way. Things are indeed different in the gay and straight worlds.

First, and most importantly, in the straight world there is usually a large disparity between the two parties in physical strength, power (whether it be social or employment related), and historical status in a patriarchal society. Look at almost all the accusations of the past two months, from Weinstein to Roy Moore to Charlie Rose. The male felt entitled to his actions simply because he was a male and the victim was a female. Moreover, the men had positions of power in relation to the victims, often a direct level of power on the job.

The Takei situation is very different. Physical strength was similar, there was no employment relationship, and as two gay men there was no perception on either side of historical status difference. In keeping with that, after Brunton said he was uncomfortable and wanted to leave, George simply said “If you feel you must; you’re in no condition to drive.” Brunton had no job or opportunity to lose, no fear of retribution, no danger of being physically restrained.

There is another big difference between the straight and gay worlds in regard to sexual impropriety. The gay community has historically followed different rules when it comes to sexuality. Many revel in our differences from the established heteronormativity. We are more free, bawdier, sometimes outrageous, less burdened with inhibitions and straitlaced prohibitions. We have been outlaws, setting our own standards in defiance of straight society. And many of us value those differences.

It is simply a fact that a lot of what has always gone on in the gay world would be considered harassment or assault in the straight world. Guys grab each other’s asses (and more!) on the dance floor or in other situations. Crude jokes or comments are made. Advances are not constrained by the “normal” restrictions of the straight world.

These actions and attitudes are far from universal, of course. And in light of recent developments perhaps we should have a conversation about whether changes should be made in our “community standards.” In fact, a debate about that very subject has begun. Some are advocating that we adopt standards closer to those of the straight world, while others are outraged that our traditional rebel outlooks are being threatened. For what it’s worth, I’m more romantically than sexually oriented than are most gays, but I nonetheless would like to see us maintain our current standards. Much of the outrage in straight America has to do with the disparity in strength, power and historical status between men and women. Since we in the gay community don’t have those differences between partners we can treat sex in a more relaxed, less emotionally fraught manner.

The more I thought about it the more I came to think that Brunton overreacted, and has been carrying along baggage that has been unnecessary. No actual harm was done, Takei used no force, and Brunton was free to leave without any coercion. I suspect that I myself likely would have left Takei’s home in that situation since I’m not comfortable with casual sex, but I am confident I would not have considered it assault. Just a horny gay guy wanting to have some fun. In fact, it would have been a fond memory. Sulu wanted to have sex with me! That’s what I would tell friends, and I’d be telling the story until the day I died.

Whether or not we think that the gay and straight worlds are different, I think we have to evaluate events of the past in light of the standards at the time, rather than using the sensitive standards that are evolving today. Interactions of the type between Takei and Brunton have been very common in the gay world. That’s just the way it has been. I have not done that sort of thing, and you may not have done so either, but it has been common and in many quarters it has been routine.

I have to be clear about one vital point: I do consider Takei to have been wrong in that he began his physical interaction with Brunton while he was unconscious. But, assuming Brunton lost consciousness temporarily from drinking rather than from being drugged, the offense was minor since nothing significant happened prior to Brunton regaining consciousness. The incident should not sully Takei’s reputation. It should not change his status as an icon.

Our “dirty gay grandpa” should be free, even in today’s new world, to admit actions of that type. It should not be seen as a sorry excuse if he or I or anyone simply says that the gay world is different from the heteronormative straight world, and especially that it has been different in the past. I wish George had done exactly that, rather than deny the story (assuming my feeling that it actually happened is correct).

I realize that our current environment won’t allow such honesty. The nation’s psyche is too raw from the explosion of revelations about the toxic attitudes and actions of men toward women. The degree to which Harvey Weinstein and others could get away with abhorrent behavior for years is appalling. The current societal upheaval will undoubtedly change the relationship between men and women, and those will be long overdue changes.

The situation is far less clear in the gay world. Certainly there will be a new emphasis on treating minors with respect, and on avoiding the sort of serial abuse in which Kevin Spacey routinely engaged. But will the gay world in general change? A recent piece in “The Advocate” argues that we should adopt the same standards of interaction being demanded by women in the straight world. Most commenters on the article disagreed, some strenuously. I think we should be careful to not go too far down the road of abolishing our freedom, our freewheeling sexuality, our unique culture. We should not forget that there are valid reasons why we can and should be different from the straight world.