We generally don’t report stories from other media outlets here, but I just came across a story on Outsports.com that is so good I have to share it with our readers.

Until he graduated this spring, Taylor Edelmann was a volleyball player for Purchase College, located 30 miles north of New York City on the Connecticut border. He was one of the best players on the team throughout his four year career, and was voted to be captain following his junior season.

When I was in college it was all I could do to keep up with my studies while trying to adjust to my new identity as gay (I didn’t fully come out to myself until I was 19). Taylor, on the other hand, in addition to being the volleyball captain, was also a resident advisor, a co-president of one of the campus clubs, and a drummer in a jam band. Oh, and he switched genders after his sophomore year and moved from the women’s team to the men’s team. 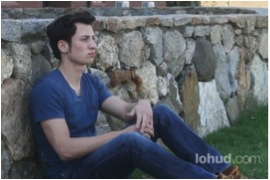 According to Outsports: “The difference between men's and women's volleyball is stark. Like tennis, the women's game is more finesse with longer volleys; the men's game is a power game that puts brute strength on display.” There was a lot of work involved to convert from a lifetime of playing the women’s version of the sport to playing the men’s version. The fact that he was voted captain is a testament to his success in making that transition.

The best part of the story is the universal support and acceptance he received. The captain’s vote is the best indication of that, but the entire campus – from students to teachers to administration – rallied around him. Said VP of Student Affairs Ernie Palmieri: “Purchase College is very proud of Taylor as both a student and as an athlete and he personifies the cultural diversity found at Purchase College. He has shown tremendous leadership both on and off the court.”

Trans acceptance has lagged way behind gay acceptance in our society, but stories like this give me hope that things may be changing in this area faster than I had thought.

Here is the Outsports article. It includes a video of Taylor from Lohud.com that worked fine last night, but isn’t working right now as I post this.

Reply The_Fixer
3:37 AM on July 22, 2013
This is very cool. Yes, Trans acceptance has lagged behind and transphobia is especially virulent, even these days when gay acceptance is on the upswing. I do hope that things like a trans-inclusive ENDA helps hasten the day when trans people are not only accepted, but understood.

Purchase College seems like it is a great place to go to school, the students and administration seem to be very supportive. I wish the best for Taylor, and the school.