In the Shepard Smith story I posted yesterday I talked about our new "topsy turvy" world, in which many of the rules or conventions regarding gays in society have changed, or have at least become less distinct than before. Another of those conventions is the very question: "is he gay or straight?" That's what we've historically asked about people, especially celebrities, over the years. From "Is Liberace gay?" to "Is One Direction gay?" And now, "Is Shepard Smith gay?" But that question assumes a black and white dichotomy. We're coming to see that reality is a lot more gray.

Shepard Smith was married in 1987 and divorced in 1993 with no children. We assume he was hiding his gay identity, or perhaps was even deceiving himself. But who knows, maybe he's bisexual. And even that word needs to be re-examined. We always talk about the Kinsey scale, but we still act as if people are straight or gay, with a few bisexuals thrown in who go equally for men or women. Perhaps Smith is "mostly" gay, but is also occasionally attracted to women. Or perhaps the reverse is true. We don't know if he doesn't tell us. AND IT'S NONE OF OUR BUSINESS. 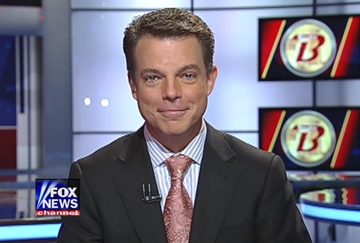 As time goes on I’m beginning to see that there are a lot more people than I thought who don’t fit into the traditional dichotomy. In addition to people all along the Kinsey scale there are people who are asexual or close to it. People who have romantic attractions with little interest in actual sex. People who get their sexual pleasure from some sort of fetish situation, some of whom also have physical interest in people and some who don’t. The "Is he gay or straight" question is not appropriate for more people than we’ve realized.

That puts a whole new spin on our exhortation to celebrities to come out. How do you come out as gay if you're somewhere along the Kinsey scale but not actually gay? Or if you fit into one of the other categories I’ve mentioned above. You can't do a People magazine "I'm Gay!" story if it's only partly true. But if you don’t announce that you’re gay or straight, if you don’t publicly insert yourself into that black or white scenario, you’re in the closet. I wonder how many people who are private about their sexuality are hiding the fact that the words "gay" or "straight" don’t really describe their situation.

I’m not suggesting anything at all about Shepard Smith specifically. But everyone is assuming he’s gay or straight, one or the other. There are only two identities a celebrity can have. But that isn’t always true.

The second addendum to the story relates to the original Gawker story, which describes Smith’s encounter with a waitress at the Bathtub Gin bar in Chelsea. If the story is true as reported in Gawker, it’s a jaw-droppingly rude and abusive performance on Smith’s part that is utterly reprehensible. I think you can tell a lot about a person’s character by how they treat strangers, and especially the service personnel with whom they come into contact. The Gawker story makes Smith seem to be a total ass.

However, is it really true? I have some serious doubts. For one thing, this is Gawker, a gossip rag not known for its journalism, and with an overt agenda. Second, the event in question occurred in March, and was just reported now, in late October. Memories change, events and comments become easily exaggerated. Third, the waitress in question committed a gross breach of professionalism - per other wait people who commented on the story - by revealing to a publication the details of an encounter with a patron. And she left her position a few months after the incident. That could be innocent - people leave jobs all the time - but it’s also possible she was a poor waitress. And then there is the NYC bartender who submitted a lengthy comment on the article, talking about the several times he had served Smith at his bar. According to him, Smith was always friendly and courteous, and left generous tips.

One important thing I’ve learned is that journalistic reports must be taken with a grain of salt. There have been several instances where I personally saw the events in a story being reported, whether an interview, a live news event, etc., and the resulting story was misleading and sometimes even flat out wrong. Many commenters on the Gawker story expressed skepticism about the story, though a majority took it at face value. "I read it on the internet," after all. Gawker is not the New York Times, and even the NYT is sometimes misleading or even wrong. It would be unfair to form an opinion of a man on the basis of the unverified comments of one person several months later. Especially when those comments are published by a gossip site that has been hounding the man in question, and that doesn’t like the man’s employer.

Reply The_Fixer
3:21 AM on November 4, 2013
I made a comment in the earlier story you posted about the situation with the waitress. That was my main concern, not whether he is gay or not.

And you're right, it was probably jumping to conclusions to think that he was definitely rude and abusive to that waitress without having been there to witness it. However, it's easy to imagine as we see a fair number of celebrities behaving this way (Justin Bieber, I thinking of you, regardless of your current efforts at image rehabilitation).

Regarding orientation not being a black-and-white affair, I have to agree. I've heard a few celebrities say that they don't identify as gay or straight, they fall in love with a person (the most recent being Morrissey saying he is "humansexual"). Which may be bisexual, although any term with -sexual as part of the word makes me uncomfortable. It's not the total definition of the person, as we know.

In the end, Smith's orientation is really not my business, any more than mine is his. I'd much rather talk about the substance of his news reports than his orientation.