No Need To Worry!

Our faithful reader and frequent commenter Hue-Man recently posted a comment expressing concern about what will happen when the carefree out young people of today enter the “real world.” With ENDA not passed in the U.S., and without legal job protections in a majority of the states, he wonders, will young people go back into the closet out of self protection?

I don’t think he has to worry. An overwhelming number of the larger companies throughout the developed world have their own policy protections in place. And in today’s increasingly tolerant world many if not most of the smaller companies won’t make job decisions on that basis. I was out to the owners in a very small company in Eastern Tennessee in the late 80s, and I never had the slightest worry, even though the owners were conservative Republicans! (I did cause a bit of concern when I started socializing with a 17-year old high school kid we hired on a part time basis. They thought it looked bad, but I just kept socializing with him. And no, nothing happened between us!) 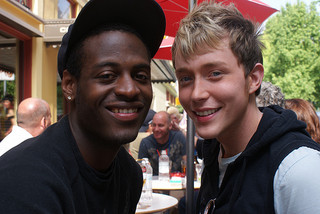 About ten years ago we hired a 23-year old at my current company. I knew the first day he was gay. After only a week on the job he and I went to lunch, and we stopped at his nearby apartment on the way back. He casually mentioned he was gay. I told him the same thing about me – I wasn’t out at that company yet. And then a couple of weeks later we started coming out one by one to our co-workers. Within two years our department of seventeen included four gay people. Today he’s fully out in his high level job at a conservative bank. His partner is out at his company, and coordinates their diversity program.

A couple of years after that I interviewed a young woman who made a point of mentioning her partner “Mary” in the interview. I discovered that she had mentioned it to all four people who interviewed her. She wanted to make sure she worked for a company that had no problem with her being gay. We hired her.

Things have only gotten more open and casual in most of the world since then. The gay media makes things seem more grim than they are, but tolerance is the norm among all but the most right wing or religious. Tolerance doesn’t always mean that people fully “approve,” but you don’t need full approval to be respected, or liked – or employed.

So you can relax, Hue-Man, the future is bright. Gay kids are out to stay!

Reply Dennis Stone
5:01 PM on February 21, 2014
Actually, I've said for years that passing ENDA is far more important than marriage equality. I can get along without marriage FAR better than I can get along without a job. On the good news front, though, I would bet the number of people fired or not hired because they are gay is quite small. But that doesn't mean that ENDA isn't a vital issue.

Reply Hue-Man
3:48 AM on February 21, 2014
Thanks for addressing the issue. The anti-LGBT legislation in Arizona would suggest that there is a political constituency in the U.S. that thinks employers and service providers want the right to discriminate. I assume you would continue to advocate for ENDA-type legislation for employment and tenancy where it hasn't been enacted; relying on the good intentions of your employer isn't the same as having the legal right to avoid unemployment if you're being discriminated against.