When You're Saving The World, Be Careful!

I became a progressive at the age of fifteen because I wanted to save the world. Even before I knew I was gay I wanted to make society more inclusive, more equitable, more concerned for the less fortunate. And that’s also why I wanted to become a writer. I wanted to write the “great American novel” that would change minds and attitudes, and galvanize my fellow citizens to take up the cause of making the world a better place.

Saving the world by making it better is the bedrock goal of progressives today, even if they don’t think of it in quite those terms. In contrast, the goal of conservatives is to preserve the best of the world as they have known it – its moral base, its traditions, its bedrock of religion and family and hard work. They see liberals as a threat to that, as people wanting to tear down the proven values with which they grew up. 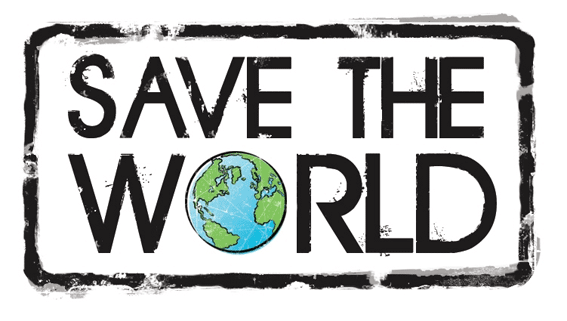 Liberals and conservatives are alike in many ways – and the irony of that comment is that both sides would be aghast at that idea. To many on each side the other side is dangerous, often stupid and reactionary, and certainly working against the best interests of society. But at the core of each group is the simple desire to make the world better. They have very different perceptions of what “better” means, but the ultimate goal is the same.

Another similarity between progressives and conservatives is that each of the movements breeds a large contingent of intolerant, self-righteous ideologues whose modus operandi when dealing with other human beings is opposite to the ideal of their philosophy. We on the left side of things understand that about the conservatives. Our websites and our television shows expose us constantly to the goofballs of the right – the Ted Cruzes, the Pat Robertsons, the Rush Limbaughs. It’s easy to see how they betray their ideal of “love thy neighbor,” and how they distort the concept of self-reliance into a lack of concern for the less fortunate.

What we don’t so readily see is the degree to which we fall into the same sort of traps ourselves. Unlike the conservatives, we don’t elect our goofballs to Congress. But we preach inclusiveness, and then turn around and ostracize and disparage those who don’t adhere to our narrow perception of how things should be. We talk a good game about diversity, but we accept no diversity of opinion. We love black people, unless they’re conservatives. Then they are Uncle Toms. We take laudable ideals and stretch them to the point where they become surreal Picasso paintings. We put the “correct” in “political correctness.”

The latest edition of “Out” has a brief story about the IFC television show “Portlandia,” starring former Sleater-Kinney singer/guitarist Carrie Brownstein and former SNL star Fred Armisen. In one episode, Brownstein’s character Toni reproaches a college woman pointing to a book she can’t reach on a shelf. “Every time you point,” says an offended Toni, “I see a penis.” The article’s writer sums up the show, and the unfortunate nature of much of our left wing community: “Try as we might, our endless quest to be open-minded, righteous and cool will inevitably breed new restrictions, elitism and hypocrisy.”

I see those attributes all over the internet, on websites devoted to specific issues and viewpoints, and among commenters on all liberal oriented sites. There is only one acceptable truth, and we have it. If you don’t share it you’re an idiot not worth talking to. There are acceptable words that we must use, acceptable political positions we must hold, acceptable philosophies from which we must not deviate. Brownstein talked about her experience in punk rock. “You’d think punk rock would be an inclusive group because it was about letting people in who felt like outcasts or misfits, but there were so many rules about how to behave. “

The gay community commits the same sins. There’s a reason people talk about the “gay card,” and taking it away if you don’t conform to what a gay person should be. That reason: intolerance. Elton John goes to Russia to perform, and we scratch our heads in consternation. He’s not living by the rules. Brandon Ambrosino writes an intriguing piece about fluidity and how he “chose to be gay,” and Ed Kennedy at the Backlot posits that his heretical piece would lead to gay people not wanting to have sex with him. Harvey Fierstein says on television that a fellow guest opposing a boycott of the Winter Olympics in Russia disgusts him. We feel pity and even hate for conservative gays who join GOProud or the Log Cabin Republicans. There may be millions of conservative gays out there, but we want them to be invisible. Comment sections on gay websites have become almost a Greek chorus of reinforcing a single viewpoint. The latest meme – and I’ve seen it several times recently – is that people writing articles that disagree with what “most of us believe” are simply being contrarian. After all, they obviously couldn’t really have views that diverge from the commonly accepted reality.

I have a friend in Washington, DC who is traditionally liberal on almost all political issues, but who has a rigorously independent mind. A few years ago he thought he’d join a local gay advocacy group. He shortly quit in disgust when he was essentially not allowed to raise any points that fell outside the preordained ideology. No debate allowed, in other words. After all, since the truth is self-evident debate is merely a distraction.

What is my point to all of this? When I was fifteen I became a progressive to oppose intolerance and expand inclusion and diversity. And that’s what I still want to do today, even if it’s my own communities that are expressing the intolerance, and my own communities that need more inclusion and diversity. No one pushes back against the one-dimensional trends, no one is fostering communication with the “other side.” Rather, the internet is segregating like minded people more than ever, and hardening attitudes. I’m probably spitting into the wind, but if even one person becomes more open to expanded outlooks, more willing to accept those with whom they disagree, I’ll have been successful.