Dawn Of A New Glee

I watched last week's episode of "Glee" with more anticipation than I've felt for the show for a LONG time. The elimination of Lima and the glee club, replaced entirely by the New York experience, heralded a brand new start for the show that I've loved for almost five years now. Can it really be that long? My love for the show had been fading, though, and I no longer looked forward to the show each week as an "event," as I used to. It had ALMOST - though not quite - become a labor to watch it, something I felt I had to do.

I didn't feel that was directly the result of new, uninteresting characters, or a lack of focus on our old favorites.  In that respect I was unlike a majority of "Glee" watchers, or at least a majority of those expressing themselves on the internet. Rather, I thought it was a combination of two things:  a gradual loss of inspiration by the writers and creators; and an inevitable reaction in myself that experienced the show as no longer something new and different. Most anything that is new and different loses its allure over time because by definition it can't remain new and different. Relationships are like that sometimes. We are enamored of someone because they bring something new to our humdrum life, but eventually the challenge becomes finding a depth that wasn't necessary at first. 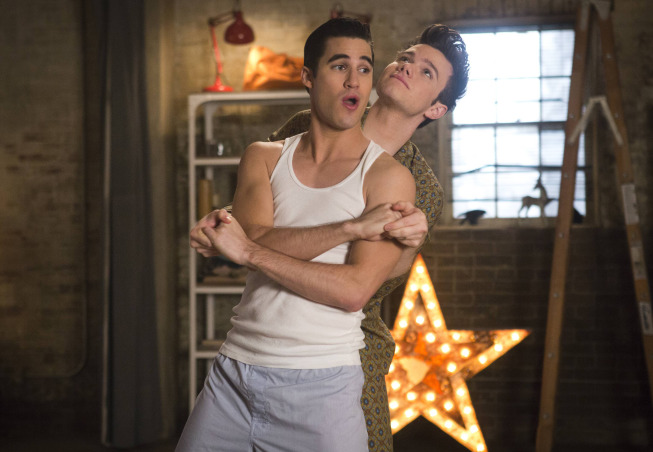 For me the show has become like one of those relationships. It has been fading for me because it's still trying to survive by being new and different, and it can't meet those standards now that I've experienced it for so long. It needs something else, something broader and deeper. I don't know whether Ryan Murphy and company figured that out themselves, or if they just decided that the fans wanted more of their favorite characters. Maybe a bit of both. But the move to New York is at least an opportunity to rekindle the magic. And to keep the show alive.

Did the move succeed? Based on comments on the internet it may have. Most commenters seemed pleased by the first New York episode. And for most gay viewers, the nature of the relationship between Kurt and Blaine was apparently quite satisfying. People seemed to feel good about the physical connection, and about the easy, natural way the show portrayed two young gay guys living together. Viewers also seemed to like the fact that the show focused entirely on characters they really wanted to see. In total, the show seemed to be highly successful with its first "new era" episode.

So what did I think? I don't have a definitive answer right now. I held off writing about the show for a few days because I wanted my feelings to coalesce and settle. But even after all this time I'm ambivalent. I see promise in the new direction (pun intended!), and a totally new dynamic and setting provides an opportunity to explore new experiences and new relationships, even among the same characters.

The relationship between Kurt and Blaine left me more ambivalent than it did most viewers. I recognize how important it is to show a gay relationship in so routine a way. I think back to when I was in my formative years. Just seeing Jodie Dallas (Billy Crystal) on "Soap" was utterly revolutionary.  An actual gay character! On television! Of course, they had to screw that up by having him enter the hospital for sex change surgery, having him attempt suicide, and having him father a child. And the network wouldn't allow him and his boyfriend Dennis to touch - at all. But before that there was NO visibility (apart from a minor character on the very short lived "Corner Bar").

And so seeing Kurt and Blaine living together, planning to be married, waking up in bed together, and sharing a long kiss, all in an utterly matter-of-fact way, is amazing and wonderful. Younger people - and a surprising number of older viewers who should know better - take that sort of thing for granted. But it's still revolutionary, while at the same time being a reflection of a new social order. We'll never know just how many young people have been opened to seeing gay people as just regular folks through the gay portrayals on "Glee."

Despite those sentiments, I found the relationship strangely unaffecting for me. Ho-hum, in fact. I think one reason is that I myself have come to take it for granted a bit, even though I intellectually understand its importance. But that's probably a good thing in a way. It certainly fits the "new millennial" paradigm. It's just not enough for a gay relationship to exist to make it interesting and for me to feel emotionally connected to it. In the past, nothing else would be required. The mere presence of gay people GUARANTEED interest and passion. That's still true for many, many people. But that just doesn't do it for me anymore.

The big problem for me in the portrayal of the relationship was that it was so shallow, sort of "by the numbers."  Couple moves in together, they're not ready to be so close so regularly, they intrude on each other's space, conflict results. Ho hum. The best part of the episode was when Blaine went to confront Elliott. Thanks to interesting acting by both Darren Criss and Adam Lambert I found that scene compelling. I find Adam an immensely appealing person as expressed through the character of Elliott. It's a shame he's leaving the show, at least for now. But apart from that scene, there was nothing in the rest of the relationship that grabbed me.

That same shallow character permeated the rest of the episode. Characters would talk for a minute or two, and then there would be a big production number. I strongly feel there are now too many songs in the show, and their sheer number is diminishing their effectiveness and their magic. And, perhaps most importantly, they are allowing the writers to get away with avoiding meaningful dialogue and genuine human emotion on an affecting level. When the show was at its best the relationships drove the show, and the songs were occasional interludes meant to heighten those relationships. It's now almost the reverse. The show is built around the songs, with the characters serving mostly as bridges between the songs.

My ultimate verdict? The show will have to get back to focusing on the relationships and the dialogue, and it will have to make those compelling and something we can really care about on a deep emotional level. In the "glory days" of the show I came away moved by the PEOPLE, not by the songs. If the show can get back to that, it can be reinvigorated. Otherwise, it will skate along on a thin shiny surface of the novelty of New York and the gay content. But it will fail, and perhaps rather quickly.

Reply PaulR
2:30 PM on April 7, 2014
"Ambivalence" is a good word for how I'm feeling too. I just wasn't sure why I felt like that. But I think you nailed it. Too many songs, and not enough depth to the characters. Hue-Man called it "bloodless". That's a good word too. I still enjoyed the episode, but I do wonder how long I'll keep enjoying it if they keep doing what they're doing. I agree, though, about Kurt and Blaine's relationship being important. If you're a 14-year old watching Glee it's pretty hard to hate gay people!

Reply Hue-Man
2:53 AM on April 7, 2014
I haven't re-watched the episode so forgive me if my memory doesn't serve me well. My reaction to the Apartment Story was less balanced - Blaine showed no respect for Kurt's space, no acknowledgement that it's "our apartment" which normally implies that decisions are made by consensus. Similarly, the decampment was similarly non-emotional with no attempt to talk through differences or feelings; a bloodless "I'm outta here". How have the writers portrayed this supposedly loving committed couple? "Room-mates with benefits"
Having moved from a small town - "hamlet" is bigger than my home-town - to the big city, I know what's involved in attempting that transition. Glee-people - especially Sam - exhibit none of those issues - homesickness, big city hustle/bustle, navigating public transport, etc. etc.
Adam Lambert, singer, has not been my cup of tea - as actor, he's impressed me when the writers have given him good material.
Is there a storyline we're supposed to be following, other than "Sam got a haircut"? In the meantime, I'll stay with it (I gave up on "Clanged" after 3 episodes because I disliked every single character).