It Gets Worse - A Lot Of Us Have Body Image Issues

I think the “it gets better” campaign has been a great thing for our community, especially the younger members. For many of us who are older it’s a pleasant affirmation that our lives have turned out pretty well. And for younger people it’s a beacon of hope that their current difficulties don’t have to define their futures. Life for young gay people can and usually does get better.

But not all aspects of gay life get better as time goes on. I was reminded of that when I recently read Ed Kennedy’s final Morning Meme on “The Backlot,” which was published on October 25, 2015. He had linked to a piece on “BuzzFeed” about male body image anxiety, which is far more common than many realize. The article was from a straight man’s perspective, but of course gay guys have the same experiences.

Many (most?) young guys have body image issues in their teen years and into young adulthood, and even before. They want to impress the girls they are increasingly attracted to, and with peer pressure so strong at those ages they want to impress their male peers as well. They worry if their muscles don’t seem large enough, if their face breaks out, if their nose is too big, if they’re fat or skinny, if they aren’t seen as handsome enough. And anything else that seems in any way deficient. 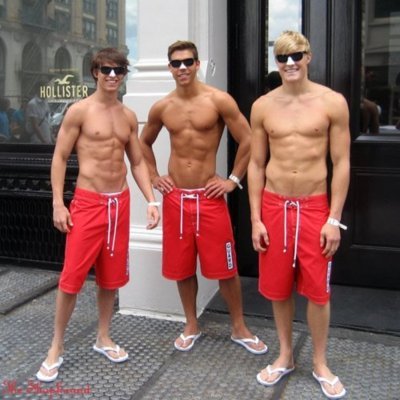 What really got me thinking as I read Ed Kennedy’s last Morning Meme was comments he made replying to a poster in the comments section. With surprising candor he talked about how he has developed increasing body image issues over the past few years as he has been aging. (I believe he’s now somewhere in his mid 40s.) He had actually had fewer issues than many as a young man, but that has been changing with age. He has been going to the gym, and has had good results. But he’s less and less satisfied. As he put it: “I look WAY better, objectively, than I did four years ago. I have abs, a chest, nice arms. But when I look at myself I don't see that…. the longer I work out, the less satisfied I am with a body that is objectively good.”

That pattern is the opposite of what we observe in many straight men. Young straight guys have body image issues because of the intense need to impress others. But as they age, getting married and raising a family, those issues tend to recede. Family life dominates their days as they guide and play with the kids, and then take them to various athletic and/or artistic activities. Further, most are no longer “on the market.” They’ve attracted and won what they assume will be their lifelong romantic and sexual partner. In fact, at that stage of life a lot of straight guys “let themselves go,” no longer having the time, interest, energy, or perceived need to seek or maintain a perfect body. The paunch spreads, the hair recedes, the wrinkles become more prominent, but it’s not that big a deal. They have too much going on with the family to focus on those things.

But for gay men it’s different. Many don’t believe in monogamy, and many in relationships keep their eyes open to, ahem, their “surroundings.” Most don’t want children. To a greater or lesser degree most feel continually on the market. Further, the ethos of the community revolves to a large degree around physical attractiveness. It tends to be an “out and about” community where, whether people want to admit it or not, a lot of judging goes on. Even gay guys with children are not immune to that ethos.

As a result gay guys don’t as readily lose the obsession with their bodies as they age. There is a greater fear of getting older, not so much because life is passing them by, but because their attractiveness to the community is waning. If straight guys do comparisons it’s with their age peers, most of whom are in the same situation. When gay guys do comparisons it’s with the young guys they used to be and would like to be again, or with the hot young actors or models they see. No wonder, like Ed, they hit the gyms, and no wonder, like Ed, they remain dissatisfied.

Think of a straight family guy you know who is middle-aged, perhaps somewhere in his 40s. Someone with a wife, kids, a job, living the typical straight lifestyle. Now think of Brian Kinney from “Queer As Folk.” Brian turned 29 in the first season, in 2001. So he’d be turning 44 this year. Think of the increasing anxiety he’d be feeling as he fights the inevitabilities of age. No longer the king of Babylon as younger and hotter guys keep coming along. No family to take up his time and energy. No philosophy of life beyond the nightly conquest. Now picture Brian at 60. It’s not hard to see why a lot of gay guys have increasing body issues as they age.

Well this has sure been a negative piece! I’m usually so positive, but this is depressing! First, I should stress that to some degree I’m generalizing. Lots of gay guys don’t fit this stereotype, and they adjust to aging quite well. Second, there is reality behind what I say, and in the end, illuminating reality can only be a good thing. If we think about what we’re doing and why we’re doing it we have an opportunity to change.

I have a solution to the problem that has largely worked for me. Of course, that doesn’t mean it will work for you! But I think the broad outline will be applicable to many. First, and most importantly, I have developed a philosophy of life that doesn’t make sex and sexual attractiveness the veritable meaning of life. You can get to that point from many possible directions, whether religion, or spirituality, or just a basic philosophy that understands the inevitable cycle of life. The hot young guys you see don’t have any more years of youth than you do, they’re just living them at a different time than you did. We all – the super sexy twenty year olds and the grizzled eighty year olds – have exactly the same cycle of life.

Second, non-sexual interpersonal relationships are very important. In my case, that means a lot of straight people as well. If you open yourself up to caring about other people and forging relationships you will be rewarded.

Third, there is nothing wrong with doing your best to maintain your body as the years go by. Exercise, eat well, use moisturizers, get contacts or stylish glasses, etc. But do it with the right attitude, and don’t obsess about it. Do it to be the best you can be, not to try to be 21 again. In my case I have a gym membership, but I only go three times a week. Twice a week I do weights, but only for forty minutes or so. And once a week I run four miles. Exercise does not dominate my life. I also have adopted the Paleo diet, which I highly recommend. The bottom line is that I’m still thin, healthy and energetic, and I appreciate where I am without needing something I can’t have.

The new realities of gay life in the 21st century are allowing us to develop new ways of living and to forge new methodologies of how to be gay. I hope that the concept of aging and body image will be one aspect of gay life that undergoes a revolution in the coming years.