Not all gay people liked Queer As Folk, the seminal Showtime series that ran from 2000 to 2005, but I loved every minute of it. There were a couple of vital dynamics that spanned the five season existence of the show. The most obvious was that sex is good, sex is fun, and more sex is better than less.

A second dynamic was the idea of gay people remaining unique, a distinct and separate community in virtual opposition to mainstream straight society. Us vs. them, as Brian Kinney certainly thought of it. Liberty Avenue was a gay neighborhood, and most characters had no significant straight people in their lives. When “breeders” (as Brian called them) showed up they seemed like interlopers in the insular and segregated world that the gays of Pittsburgh had created. 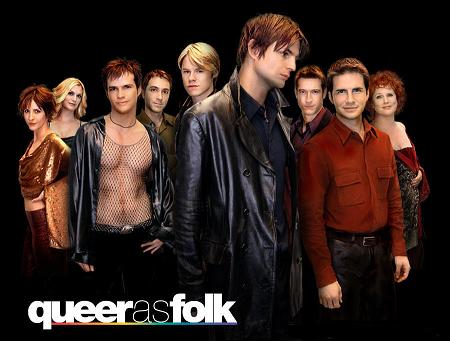 The conflict between that idea and the emerging concept of assimilation intensified as the series continued, reaching its apotheosis in the final episode. Brian’s lifelong best friend, Michael, moved to the suburbs with husband Ben to raise a family. Brian called him a “Stepford fag,” and implored him not to go.

Assimilation is a dirty word to much of the gay community. One dictionary definition says it is “the process of adapting or adjusting to the culture of a group.” Another, more chilling, defines it as “the state of being absorbed into something.” That reminds me of the Borg on Star Trek: The Next Generation, where the individual consciousness is sublimated to the larger group.

Series creators Ron Cowen and Daniel Lipman talked to Huffington Post about the show in 2015, and Cowen said this about assimilation: “If you want to assimilate, you want to be like them, what do you keep of yourself and what do you sacrifice in order to be part of the mainstream? You always have to give up some part of your identity to blend in. That’s the thing we need to figure out.”

Ron Cowen has it completely wrong. The “assimilation” trend we see today is not a matter of gay people trying to “be like them.” Few of those moving in that direction have any desire or intention to blend in or give up their identity. Rather, the phenomenal social revolution of the past twenty years has allowed many if not most gay people to live openly and safely among straight people, to have close and meaningful straight friends, to be part of mainstream society without compromise. In essence, they are assimilated without even trying.

The ghettoization represented by Liberty Avenue was essential in earlier times, when gay people could be themselves and feel safe only around other gay people. That situation solidified over the years and became a dominant aspect of gay life. Remember what Brian Kinney said about straight people: “There's only two kinds of straight people in this world: the ones that hate you to your face, and the ones that hate you behind your back.”

Consider a young gay person coming of age in a previous generation. His burgeoning gay identity was frightening, and there was no one to confide in, no role models on TV or in mainstream movies, few resources of support or approval. His isolation led to an overwhelming need to connect with other gay people so he could feel open about his identity, so he could be his true self. A common refrain I hear from people of those generations is how relieved and empowered they felt the first time they entered a gay bar or attended a gay fellowship group. “For the first time I felt like I was with my own people,” they say. In that world the development of segregated gay communities was both inevitable and necessary.

Times have certainly changed. Today the reality for many gay people is acceptance and friendship from mainstream society. Corporations and institutions of all kinds - even churches - express support. There are gay celebrities everywhere, gay characters with whom to identify, often other gay people at work or school, solidarity expressed by presidents and other public figures. YouTube is filled with young gay people buoyantly discovering and exploring their worlds. By the time of college - and increasingly in high school - gays are able to confide in their peers and be full fledged participants in the society around them. The forces that drove them to insular communities to be themselves have largely disappeared.

I have talked to young gay people who love and value their straight friends. They have no desire to exchange them for gay friends in order to be a part of a community that many see as unnecessary and even anachronistic. Gay people will always feel a special kinship with other gay people. The objects of their affection will mark them as different from the rest of society. But the natural evolutionary result of our increasing acceptance is more people remaining within the mainstream society rather than choosing to separate from it.

Gay people are not assimilating. They are not giving up parts of their identity or making sacrifices to fit in with the straight world. They are not trying to be like the straight people that surround them. Rather, they are being themselves, whether gloriously flamboyant or more reserved. For the first time in our history many can do that without having to create a world within a world.